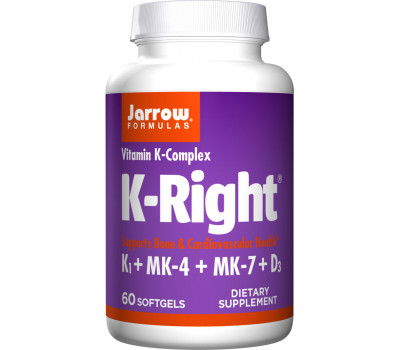 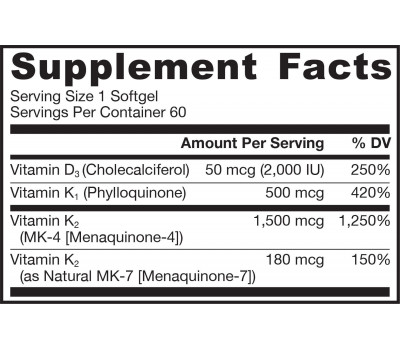 Jarrow Formulas K-Right ™ is a synergistic combination of three forms of Vitamin K: MK-7, MK-4 and K1, plus vitamin D3 to promote bone and cardiovascular health.
Vitamin K is essential for the carboxylation of osteocalcin, which binds calcium in bones.
Vitamin D3 is essential for the production of osteocalcin.
Jarrow Formulas® MK-7 is a product of natural fermentation using Bacillus subtilis subsp. natto.


who can benefit from K-Right?
Adolescents up to the elderly seeking to improve and maintain vitamin K and D status in support of bone and cardiovascular health

vitaMK7® is a registered trademark of Gnosis.

Naturally occurring forms of vitamin K include phylloquinone (vitamin K1) and a family of molecules called menaquinones (vitamin K2). Phylloquinone (K1) is made by plants and algae, and is the predominant form in typical Western diets, whereas menaquinones (K2) are made by bacteria and difficult to obtain meaningful amounts through the diet alone.

Both vitamin K1 and K2 function as an essential cofactor for the enzyme, gamma-glutamyl carboxylase (GGCX), which converts specific protein-bound glutamic acid (Glu) residues to gamma-carboxyglutamic acid (Gla) residues capable of binding calcium ions, a process known as carboxylation.
The carboxylation of calcium-regulating vitamin K-dependent proteins (VKDPs) is needed to convey functional activity in the body (“activate”). VKDPs have well recognized roles in blood coagulation, bone mineralization, and restriction of calcium deposition into soft tissues such as the arteries.

Vitamin D, another fat-soluble vitamin important for bone and cardiovascular health, works synergistically with vitamin K.
The active form of vitamin D in the body, calcitriol, positively regulates the gene expression of VKDPs. Thus, vitamin D supports the production of VKDPs and vitamin K is needed to “activate” those proteins.

Beyond blood clotting: bone & cardiovascular health
Originally identified for its role in blood clot formation (“K” is derived from the German word “koagulation”), vitamin K is now recognized for its role in bone formation and the prevention of soft tissue calcification. A number of VKDPs have been identified in the organic matrix of bone including osteocalcin (OC), the most abundant non-collagen protein in bone. OC is made by boneforming cells (osteoblasts), which is positively regulated by the active form of vitamin D (calcitriol), and is indispensable for bone mineralization. Fully carboxylated OC (cOC) is positioned within bone and binds calcium strongly to consolidate calcification of the hydroxyapatite crystal lattice, but when undercarboxylated (ucOC), the calcium binding capacity of OC is greatly diminished.
Insufficient vitamin K availability impairs OC function and is associated with greater risk of bone fractures, whereas higher vitamin K status is associated with greater bone mineral density in both children and adults, along with reduced fracture risk.

The VKDP, matrix-Gla protein (MGP), operates predominantly in the extracellular matrix of soft tissues (e.g., blood vessels, heart, lungs, cartilage) to restrict calcium deposition. The gene promoter region of MGP has a vitamin D response element and vitamin D3 has been shown to increase MGP gene expression to support its production. MGP likely inhibits blood vessel calcification by binding calcium ions to sequester them and thereby restrict their incorporation into the extracellular matrix that can lead to hardening and compromise function.

MK-7: The Premier Form of Vitamin K
Clinical research has shown that supplementation with the longchain menaquinone, MK-7, results in significantly higher and more stable blood levels of vitamin K (7- to 8-fold), and greater efficacy in carboxylation of VKDPs in both the liver and peripheral tissues compared to vitamin K1.
MK-7 was also shown to be significantly more effective than equivalent dosing of MK-4 at increasing vitamin K levels in circulation and increasing tissue levels of MK-4 significantly better than MK-4 itself.

MK-4: unique, non-enzymatic functions
Because all forms of vitamin K can be converted to MK-4 in the body, MK-4 was thought to have unique functions other than as an essential GGCX cofactor. Indeed, MK-4 has been shown to bind the steroid and xenobiotic receptor (SXR) to increase the expression of genes that support the formation of bone and increased the accumulation of collagen in bone forming cells, whereas other forms of vitamin K do not activate this receptor.
This non-enzymatic function of vitamin K compliments functions of the active form of vitamin D at positively regulating the activity of bone forming cells. Treatment of bone forming cells with both vitamins D3 and K2 (as MK-7) enhanced bone forming activities including collagen production, and MK-7 augmented vitamin D3 induction of osteocalcin.

warning and contra-indications
If you have a medical condition, are pregnant, lactating, trying to conceive, under the age of 18 or taking medications (especially anticoagulants such as warfarin/coumadin), consult your healthcare professional before using this product.