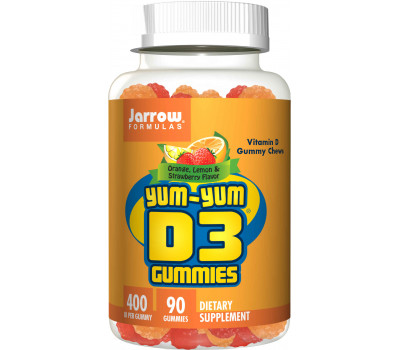 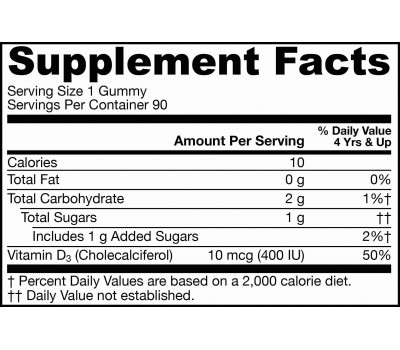 who can benefit from Yum-Yum D3 Gummies 400iu?
Children may be particular appreciative of this flavoured chew as a substitute for swallowing capsules or cod liver oil.
However, anyone who may be deficient in vitamin D because of lack of adequate sun exposure (including sunscreen use and latitude of residence) or due to low dietary intake may find this product useful.

how does the active ingredient function in Yum-Yum D3 Gummies?
• vitamin D3 is the form of vitamin D naturally produced by humans. Vitamin D is of critical importance in the metabolism of calcium and phosphorous for promoting healthy bones and teeth. Vitamin D is increasingly becoming recognized as a prhomrone affecting immune function, cognition, skin health and more.

In recent years, research has been elucidating new and vital roles that vitamin D plays in the human body. In fact, it seems that a new study concerning the health benefits of vitamin D appears almost daily. Now in addition to skeletal health, Vitamin D appears to have critical roles in many areas of the body, especially in children, including: the brain, skin, muscles and the immune system.

what is vitamin D?
Vitamin D is a group of fat-soluble prohormones including the two main forms, cholecalciferol (D3) and ergocalciferol (D2), lesser forms like 22-dihydroergocalciferol (D4) and sitocalciferol (D5), and the metabolites of these compounds. Structurally, the entire group is considered secosteroids. This means their ring structure is similar to steroids, except for one broken bond (in the B ring). The individual D molecules differ structurally in the side-chains that branch from this core structure.

Vitamin D was originally designated as a “vitamin” because it was shown to be essential in preventing rickets. But this is only one requirement of a vitamin. The strict definition of the term “vitamin” requires that a substance is essential to human nutrition (usually by preventing/alleviating a deficiency disease) AND must be obtained from the diet because the human body cannot produce it. Vitamins act as cofactors, coenzymes and precursors to coenzymes that help regulate metabolic processes but do not provide energy or serve any anabolic function.

There are a few things that make vitamin D different in this case. First, certain types of vitamin D can be produced endogenously; however the human body needs sufficient exposure to certain wavelengths of sunlight to do this. Second, all forms of vitamin D must be modified in the body to the active form of calcitriol, i.e. 1,25-dihydroxycholecalciferol (abbreviated 1,25-OH2-D3 or 1,25-D). And third, it appears that 1,25-D has roles greater than those attributed to cofactors/coenzymes helping regulate many processes in the human body. All together, this makes “vitamin D” a group of prohormones.

Where does vitamin D come from?
The human body makes D3 when the skin is exposed to ultraviolet B (UVB) radiation. D2 on the other hand is made by plants, fungi and some invertebrates. Depending on the season, UVB radiation can be in short supply or of very low intensity in latitudes outside of the tropics.
For instance in the fall and winter months in New York, UVB rays are either entirely filtered or are of weakened intensity at ground level.

Depending on where we reside in relation to the equator, the amount of melanin naturally present in our skin and how judicious we are with sunscreen application, we rely more or less on vitamin D intake from foods. The most common dietary sources of vitamin D are fatty fishes. Cold water fish liver oils are particularly concentrated in vitamin D. For instance, cod liver oil contains about 1,300 IU of D per tablespoon (~15 mL). All those who were forced to take cod liver oil by their mothers, who insisted that it was good for them, can now take comfort in knowing that she actually knew what she was talking about.

Why is vitamin D important?
Rickets is a condition that afflicts children where bone growth is hindered by poor calcium absorption often leading to soft and deformed bones. Through this connection, it was later determined that vitamin D is necessary for the efficient absorption of calcium from the diet and the proper regulation of calcium and phosphorous levels in the blood. Without vitamin D to help regulate these levels, readsorption of calcium by the kidneys is impaired and the constant remodeling of bone through the action of osteoblasts and osteoclasts is hindered.

However an explanation of how vitamin D can affect various body systems and how low levels can be correlated with various health conditions probably stems from the existence of the Vitamin D receptor (VDR), a super-family of nuclear receptors. This family of receptors is expressed in most human tissues where it is increasingly being found to have a multitude of functions.

Jarrow Formulas Yum-Yum D3 Gummies delivers 400 IU of vitamin D3 (as cholecalciferol) per serving in a delicious gummy. Vitamin D3 is of critical importance throughout the bodies of growing children (and adults), helping the body to absorb calcium for strong bones, and promoting the health of muscles, skin, brain and the immune system.

recommended use
for children age 4 and up, chew 1 gummy per day with a meal, or as directed by your qualified health care consultant.

† the Recommended Daily Intake for D3 will be changed upwards, so giving a % of RDI is not really useful.
To prevent deficiency an intake of 400iu is recommended, while optimal intake for adults is somewhere between 1000 and 2500 iu/day.

storage
keep dry and closed at normal room temperature between 15 - 22°C.
keep out of reach of children