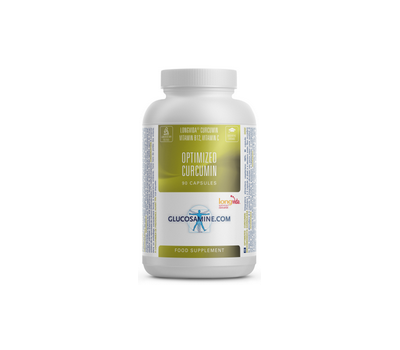 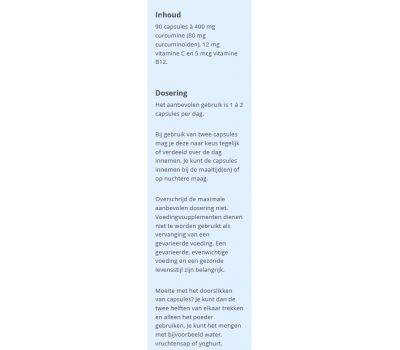 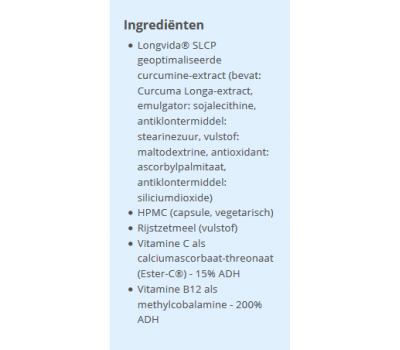 Optimized Curcumine
Curcumin is quickly gaining popularity. At least one in five Americans aged 55 and older who use supplements take a curcumin supplement. The use of curcumin is taking off rapidly in Europe too. It is now the most popular supplement.

Curcumin is a natural substance that is present in the root of the turmeric plant (Curcuma), also known as the Golden Spice from India. Turmeric is also widely used as a spice in Indian cuisine. Curcumin is one of the substances that give turmeric its yellow colour.

On its own, curcumin - just like the other curcuminoids - is not well absorbed by the body. To get the most out of curcumin supplements, scientists have sought different ways to improve this absorption. The best method is one that combines very good absorption with maximum safety of use.

Longvida® Optimized Curcumin was selected as the ingredient that excels in these two qualities. The phospholipids method used for this curcumin ensures a 95-times higher absorption of curcumin. In contrast to several other methods, it does not have any potential adverse effects.

By choosing Optimized Curcumin , you are choosing quality.

The right dosage. Because of the varying and generally low absorbability of many curcumin preparations, it is often difficult to specify a correct dosage. With Longvida® Optimized Curcumin this is not a problem. A total of 19 scientific studies have been conducted with this ingredient up to 2018. These studies have shown that already with 400 mg Longvida® a large amount of curcuminoids find their way through the human body. After more than 7 hours half of the absorbed curcuminoids are still active, and 24 hours after intake a significant amount remains in the bloodstream. Thanks to this long-lasting release, you only have to take one dose of Optimized Curcumin a day.

Guaranteed quality. This top-quality ingredient is produced by Verdure Sciences, an American company that has widely invested in scientific research. The processing of Curcuma plants into the final ingredient is done in conformity with ISO 22000 and ISO 9001 standards. The processing of the ingredients into capsules takes place in the Netherlands under strict procedures (GMP standard).

Independently tested. The end product is randomly tested for heavy metals and biological pollutants by the independent laboratory NutriControl

brand
Brand or make of the product, sometimes the name of the manufacturer
:
Power Supplements
brand ingredient:
best before:
April 2022
appearance:
audience

However, over the past few months it has become clear how a lot of biomass comes from trees, that were previously pristine forests in the USA or the Baltics.
While in the best case, the use of biomass could even be CO2 negative, burning biomass will result in excessive CO2 output locally as well as of particulate matter.
This is why almost overnight, due to negative public opinion, politicians changed their mind. Too late though, there are already few hundred biomass plants that are being constructed due to substantial subsidies that were handed out, so we can expect a substantial worsening of air quality in the upcoming decade(s) because of the increased amount of particulate matter.
Read more
Low-dose radiation therapy

Last week I listened to a Dutch podcast, which in general discusses news and politics, but for once, talked about low-dose radiatian therapy as a way to treat COVID-19. This made me curious enough that I wanted to find out more about this particular treatment method.

Most of us know at least one person, whos's been treated with high-dose radiation order to get rid of a malignant tumor. It is less well known that low dosages can be used as well and is used in some countries to treat inflammation disorders such as arthritis.

In general, this is met with disbelief as the official point of view is "all radiation is harmful" .

Proof to the contrary

Yet, over 3000 scientific research papers show that low dose irradiation is stimulatory and/or beneficial in a wide variety of microbes, plants, invertebrates, and vertebrates.

Read more
How to prevent getting sick from the flu

How to prevent getting sick from the flu

You can prevent germs from making you ill in two ways: prevent entry into the body by careful hygiene, and if they do get in, make sure your body’s natural immune system is able to fight these germs, so they self-destruct before overwhelming the system.

Most flu germs are spread in two ways:

recommended use
Take 1 to 2 capsules daily,with food.
For enhanced joint protection, take 1 capsule 2 times per day or as directed by your qualified health care consultant.
Do you have difficulty swallowing capsules? You can open the capsule by separating the two halves and just use the powder. You can combine it with liquids such as water, fruit juice, or yoghurt.

Pregnancy and breast-feeding
It is not recommended to use curcumin during pregnancy or during breast-feeding. No research has been conducted into the effects of curcumin supplements in these situations.