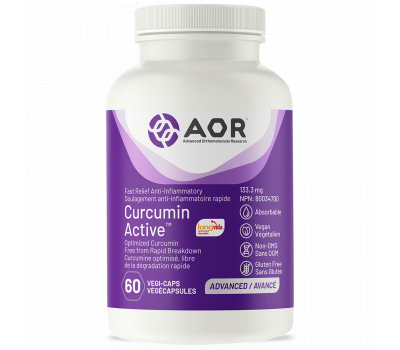 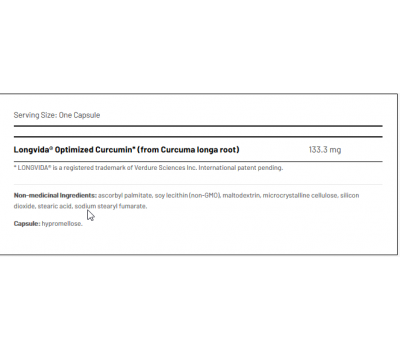 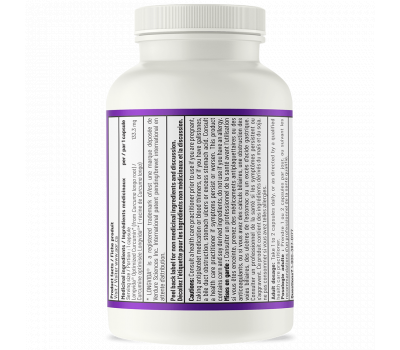 Curcumin is famous for its' ability to reduce inflammation, resulting in relief for aching joints. Unfortunately curcumin is poorly absorbed.

AOR Curcumin Active Over the last decade a great deal of research has been done to develop formulations that improve the bioavailability of curcumin.
The goal has been to deliver more of the active molecules to the body in a much lower daily dose; as few as one to three capsules per day. There have been a number of technologies developed, but the one that has provided the most compelling evidence is nano-technology. Curcumin Active is one such formula based on this proven technology.
Curcumin Active consists of solid lipid particles (SLP) which are tiny nano-sized (1 billionth of a meter) particles that have a protected layer that provides a phenomenal increase in stability, potency and effectiveness. Unlike regular curcumin that is easily broken down by stomach acids, Curcumin Fast Relief particles are resistant to acid breakdown.
LONGVIDA® is a registered trademark of Verdure Sciences Inc. International patent pending.

Do Not Confuse Turmeric Root with Curcumin!
Curcumin is a powerful anti-inflammatory derived from turmeric root. Due to its widespread mechanisms of action, curcumin has been studied for conditions such as cancer, Alzheimer’s disease, irritable bowel disease (IBD), colitis, diabetes, rheumatoid arthritis, viral infections such as hepatitis, drug-resistant bacterial infections, healing of skin conditions, and more.

Researchers recommend taking a dose of 3 to 4 g of 95% curcumin per day in order to obtain any health benefits like pain relief, inflammation reduction, or improvements to heart health or diabetes. This 3-4 g dose is equivalent to taking 7 to 10 capsules of curcumin 95%, or between twenty to thirty capsules of a high potency 750 mg 10:1 ratio extract of turmeric root! Clearly taking this amount of capsules per day is unreasonable.

Longvida®, a highly bioavailable form of curcumin, is the result of testing over two hundred formulations and has taken more than ten years to develop. In a human study on cancer patients, Longvida® curcumin was shown to be over 100 times more bioavailable than regular curcumin. This formulation was developed and patented by UCLA Medical School and is licensed exclusively to Advanced Orthomolecular Research (AOR).

Other benefits are:
• One 133 mg capsule is equivalent to over 13 g of curcumin. This would require taking 33 capsules of regular 95% curcumin extract or more than 100 capsules of 750 mg turmeric root extract!
• Vegan formula

Turmeric root supplements absolutely do not offer the same benefits as those containing isolated curcumin. Curcumin is the most potent component of the turmeric root. Unfortunately, turmeric root contains less than 2% of curcumin making it ineffective for any health benefits. In addition, over 95% of all clinical studies have been conducted using isolated curcumin and NOT with the turmeric root.
Even 750mg of a 10:1 ratio extract of turmeric will deliver no more than 150mg of the active curcumin. But given the poor bioavailability (the amount of the active compound that reaches the target site or site of action) of this compound, the amount you actually get is likely far less than that. Clinical studies suggest that the bioavailability is less than 5%, making even standard 95% curcumin formulations fairly ineffective. As for a significantly weakened turmeric root formula? That becomes essentially useless!

Research
Curcumin is currently being heavily studied for use as an adjunct to conventional cancer treatments. Unfortunately, most of the studies have noted minimal results despite promising in vitro and animal studies. Researchers have recognized that the cause for the poor results is curcumin’s poor bioavailability.

Bioavailability
Gota and colleagues did a safety and bioavailability study on healthy volunteers and patients with non-responsive bone cancer. Subjects were given doses between 400 and 1,200 mg of curcumin in solid lipid particle form (equivalent to 3 to 9 capsules of Curcumin Active). All doses showed significant absorption into the bloodstream over 8 hours with no adverse events. This is especially significant since previous studies giving 8,000-12,000 mg of pure regular curcumin barely showed any blood levels or clinical improvements. In addition, the 1,200 mg dose produced blood levels of curcumin necessary to reduce isoprostanes, TNF-α, and amyloid-β, which are markers for diseases like cancer and Alzheimer’s disease.

Amyloid-β Reductions
There is also significant interest in its ability to reduce amyloid-β plaque, which is thought to be a causative factor of Alzheimer’s disease. In vitro and animal studies have shown that curcumin can significantly reduce levels of amyloid-β and preserve Alzheimer model animal memory. Finally, a recent human study has shown that just 80 mg of curcumin can reduce amyloid-β in humans. The curcumin that was finally able to do so was Longvida® curcumin SLP, and in just one month.

Longvida® Curcumin in Humans
A human trial on curcumin showed statistically significant effects on clinical endpoints in a healthy population. The fact that such a low dose (80 mg) was needed to achieve effects in only 30 days is an interesting and unique finding as well, and adds to the substantial amount of pharmacokinetic and pharmacodynamic data compiled on Longvida®.
The results of the study suggest that curcumin can produce beneficial effects in people who are without immediate disease states. The study was conducted on 38 healthy middle aged people between the age of 40 and 60 who were either given a dose of 80 mg/day of Longvida® curcumin extract for four weeks or were a part of the 19 person placebo group. The study is particularly interesting because the relatively small dose of curcumin, from Longvida® which was used, exerted a variety of health promoting effects leading researchers to presume that a significant amount of the curcumin was absorbed, although not tested directly.

Blood sample readings collected from test subjects to assess nitric oxide and sICAM molecules which are relevant to assessing cardiovascular risk and related to blood pressure and atherosclerosis, were notably affected by the curcumin. Both readings corresponded to a decreased risk of cardiovascular disease. The study also indicated that curcumin may have a positive effect on liver health maintenance as was noted from the reduction of indicators used to mark liver injury.
Participants had lowered levels of triglycerides which relates to other research demonstrating that cholesterol could potentially be lowered in relatively healthy persons given higher dosages of the substance, thus benefiting those with or at risk of having cardiovascular disease.

Interestingly, other markers of inflammation and free radicals/toxic species that cause inflammation and damage to cells were also significantly lowered. Both direct and indirect antioxidant actions of curcumin were evident in the subjects; these findings are consistent with in vitro and animal studies used to measure increases in curcumin induced antioxidant enzyme activity.

Market Trends
Numerous supplements on the market contain the curcumin extract of turmeric. However, many of these are poorly absorbed and offer little value in terms of therapeutic benefit due to their poor bioavailability.

New Technology – Better Products!
Over the last ten years a great deal of research has been done to develop formulations that improve the bioavailability of curcumin. The goal has been to deliver more of the active molecules to the body in a much lower daily dose; as few as one to three capsules per day. There have been a number of technologies developed, but the one that has provided the most compelling evidence is nano-technology.

AOR Advantage
Longvida® curcumin was introduced to Canada exclusively by AOR in 2011. Curcumin Active is clinically proven to deliver several health benefits as a result of its higher bioavailability over regular curcumin supplements and has the following advantages:
• Clinically tested with results published in 2010 in the prestigious Journal of Agricultural and Food Chemistry. In the study, patients with cancer of the bone experienced few to no adverse effects and good tolerability of the equivalent of up to 9 capsules of Curcumin Active.
• A 100-fold increase in bioavailability compared to regular curcumin.
• Patented by the University of California
• Published study showing positive effects in reducing beta-amyloid levels in humans

Curcumin Active TM consists of solid lipid particles (SLP) which are tiny nano-sized (1 billionth of a meter) particles that have a protected layer that provides a phenomenal increase in stability, potency and effectiveness. Unlike regular curcumin that is easily broken down by stomach acids, Curcumin Fast Relief particles are resistant to acid breakdown. Even more important is the fact that these tiny particles are absorbed very rapidly. This means that they deliver all of the health benefits of curcumin, including pain relief, reduced inflammation, antioxidant properties and other effects much faster than any other curcumin product.

recommended use
Take 1 to 2 capsules daily,with food.
For enhanced joint protection, take 1 capsule 2 times per day or as directed by your qualified health care consultant.