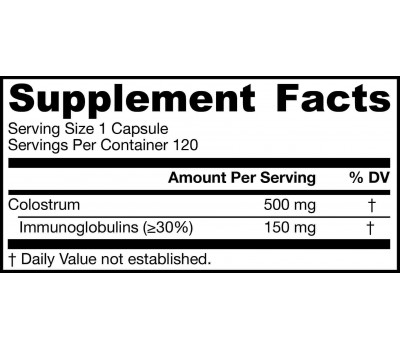 who can benefit from Colostrum Prime Life®?
Colostrum can be used by those seeking to optimize their immune system or improve their gastrointestinal health. Several studies indicate colostrum may benefit athletes by enhancing performance and boosting post-exercise recovery.

how do the active ingredients function in Colostrum Prime Life®
Colostrum is a source of powerful immune enhancers known as immunoglobulins. Growth factors in colostrum include insulinlike growth factors and transforming growth factors and are believed to play an important role in the development of skeletal muscle, gastrointestinal differentiation, cell repair, and exerciseperformance-enhancement.
The lactoferrin contained in Colostrum Prime Life® is an an iron-binding protein that is activated by the inflammation response. A wide variety of functions are attributed to lactoferrin. These range from a role in the control of iron availability to immune modulation. Lactoferrin may further support immune function by promoting the growth of the good bacteria lactobacilli and bifidobacteria.

background reading
Why Colostrum, the "first milk" is so important
Newborn babies have weak, underdeveloped immune responses. They must rely upon a gift from their mothers during their first weeks of life for optimal immune function. Colostrum is a form of milk that is produced in the mammary glands of mammals prior to birth and shortly thereafter. It is a source of immunoglobulins, which supply passive immunity to newborns as a part of their initinial defense. Considerable evidence points to immunoglobulins as powerful immune enhancers. In fact, colostrum is so important to newborn calves that, if they do not receive it, most of these calves will die within three months of birth.

Immunoglobulin factors
These immunoglobulins (Ig) consist of structurally related proteins, also called gammaglobulins, all of which act as antibodies. These components of the immune system include IgA, IgE, IgG, etc., each of which is itself a “family” of more closely related proteins. In the new-born, immunoglobulins supply “passive immunity”, meaning that the mother’s immune response to pathogens, a response developed from her own exposure, is made available to the baby through colostrum.

Colostrum provides at least two more benefits to the immune system: “transfer factor” and lactoferrin. Transfer factor (TF) refers to a form of RNA (ribonucleic acid) which “transfers” the coding for cell-mediated immunity, meaning the immunity which depends upon T-cells (T-lym- phocytes), as opposed to the immunity based on the B-cells, which produce antibodies. Whereas the B-cells are very short-lived, the T (thymus-derived) immune cells are involved in immune modulation that persists for months or even years. As such, colostrum stimulates cell-mediated immunity.

Lactoferrin, a component of colostrum, is an iron-binding protein which is activated by the inflammation response. It is found in milk, but also in the tears, saliva and mucosal secretions of mammals. Early investigators believed that lactoferrin acted primarily by binding iron. However, new research demonstrates that lactoferrin may help make natural killer cells and other neutrophils more active.

Finally, lactoferrin does not affect the probiotic bacteria (beneficial bacteria) lactobacillus; in fact, it may actually promote the growth of bifidobacteria, which is found in the large intestine.

Exercise enhancement
A recent study indicates colostrum may be useful to athletes and others that take part in high-intensity exercise. Researchers feel supplementation with colostrum could promote optimal recovery from exercise by affecting specific immune parameters. Other studies have shown growth factors such as IGF-1 from colostrum may enhance exercise performance and improve post-exercise recovery.

Immunoglobulins themselves are quite fragile and therefore need proper handling and processing. Two factors involving this collection and processing of colostrum determine the value of colostrum supplements. First, true colostrum can only be collected within 12 hours of calving for maximum activity. Second, only freeze-drying ensures that the different colostrum immunoglobulin fractions and growth factors retain their biological activity and are not denatured. Many manufacturers utilize spray drying, but spray drying substantially denatures colostrum. Jarrow Formulas colostrum is freeze-dried, ensuring the integrity of all vital components.

Why does stress make us sick more easily?

Most diseases that we are dealing with nowadays are chronic diseases as a result of poor lifestyle choices that will only affect us later in life. However, we can get sick much sooner when exposed to chronic stress. How can this happen?

Stress is defined as a series of events, starting with a stimulus leading to a stress response known as the 'fight-or-flight' reaction that can affect many body systems.
Physical or physiological stress is mostly short-lived, while psychological or emotional stress can last for a very long time.
Read more
Breast milk is best

It is not even so long ago, when baby formulas were almost enforced upon new moms that gave birth to a baby in a hospital because the babies were withheld from the new mom, which makes it much harder to start breast feeding their newborn child.
Read more
Smile, don't kiss!

Despite the name, a cold is not what causes cold sores, but a virus infection, called herpes simplex virus type 1 (HSV-1) is to blame. Cold sores usually are transmitted via well-meaning kisses and most already pick it up as a kid.

When someone gets infected with HSV-1, the virus makes its way through the skin and into a group of nerve cells (ganglion). The virus moves in here, takes a long snooze, and every now and then decides to wake up and cause a cold sore. Between outbreaks, HSV-1 hides inside nerve cells, so it's never completely cured.

recommended use
Take 1 capsule 1 to 2 times per day between meals or as directed by your qualified health care consultant.