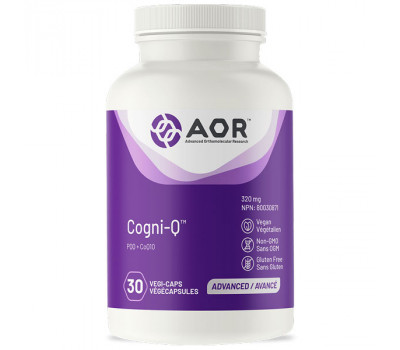 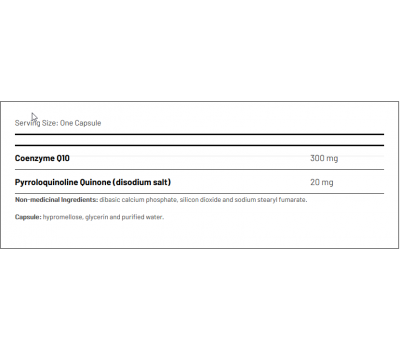 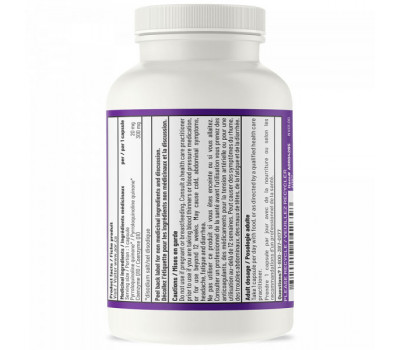 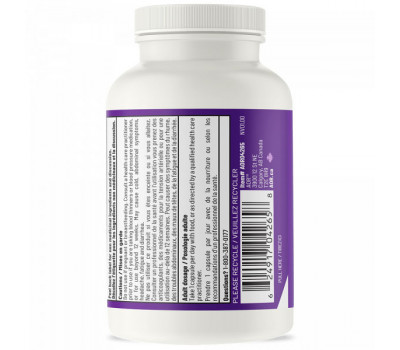 AOR Cogni-Q contains a combination of 20mg PQQ (pyrroloquinoline quinone) and 300mg co-enzyme Q10. Pyrroloquinoline Quinone (PQQ) is a recently discovered B-vitamin-like nutrient that is not practically obtained from food.
Co-enzym Q10 is an important antioxidant found in high concentration in human heart and liver, is part of the cell's electron transport system, needed for ATP (i.e. energy) production within the cells. Co-Q10 also restores co-Q10 levels reduced or depleted by use of statins.
Oxidative stress is implicated in age-related cognitive decline. Both PQQ and CoQ10 have been shown to reduce neurodegeneration thanks to their antioxidant functions, their ability to reduce mitochondrial damage, and their involvement in mitochondrial energy production. .

A New B vitamin?
Introducing another exciting discovery on the brain health front! Pyrroloquinoline Quinone (PQQ) is a recently discovered B-vitamin-like nutrient that is not practically obtained from food. It helps with the metabolism of lysine. However, this is not the highlight of its benefits.

A Powerful Combination
PQQ is generally more potent when combined with other strong antioxidants like Vitamin E or lipoic acid. Both PQQ and Co-enzyme Q10 have been shown to reduce neurodegeneration and have been shown in studies to enhance cognitive function in terms of general cognition and memory while reducing the build-up of amyloid plaque which is responsible for Alzheimer’s type dementia.
These functions exist thanks to their antioxidant function, their ability to prevent damage to the mitochondria, and their ability to stimulate “nerve growth factor,” which promotes peripheral nerve regeneration. In elderly test subjects, one study showed that memory improved more than double that of the control group using PQQ alone, and that the results were accentuated when combined with CoQ10. PQQ has also been shown to delay brain atrophy, that is, the shrinking of the brain, with aging.

Protection for the Mind
Protect the aging brain from neurotoxicity for the future while improving overall brain function today with the help of CogniQ, a brain health product that is backed by research with solid results.

Pyrroloquinoline Quinone (PQQ) is a recently discovered B-vitamin-like nutrient that is not practically obtained from food. PQQ is generally more potent when combined with other strong antioxidants like Vitamin E or lipoic acid.
Both PQQ and Co-enzyme Q10 have been shown to reduce neurodegeneration and have been shown in studies to enhance cognitive function in terms of general cognition and memory while reducing the build-up of amyloid plaque which is responsible for Alzheimer’s-type dementia. PQQ has also been shown to delay brain atrophy, that is, the shrinking of the brain, with aging.

Why PQQ Is Being Called ‘A New Vitamin’
A vitamin, by definition, is a substance that is required by the body to carry out essential biochemical functions, and for the most part cannot be produced endogenously and must be obtained from the diet or supplements.
PQQ’s potential status as a vitamin (a B-vitamin to be precise) is based on its function and structure. It is structurally a quinone, such a coenzyme Q10. Its discoverers have proposed that it is a B-vitamin due to the fact that it plays a role in the metabolism of the essential amino acid lysine, which helps form collagen (essential to all connective tissues) and aids in the production of antibodies, hormones & enzymes.
The central role common to the B-complex family of vitamins is the metabolism of proteins, fats and carbohydrates, and PQQ’s involvement in the metabolism of lysine theoretically qualifies it for that classification, as does its water-solubility. However, PQQ’s potential benefits are certainly not limited to enhancing the body’s ability to process lysine.

A Synergistic Combination
Japanese researchers have studied the cognitive effects of the PQQ in combination with CoQ10. Both PQQ and CoQ10 are powerful antioxidants with beneficial effects for cognition. PQQ has been shown to protect neurons from toxicity, to enhance nerve growth factor production, to inhibit free radical damage and to prevent memory deficits related to free radical damage.
Recent studies also show that these benefits are accentuated by CoQ10. This should come as no surprise given that CoQ10 by itself has been shown to prevent neurodegeneration because of its effects on the mitochondria. Trials have showed that CoQ10 supplementation delays brain atrophy and the formation of amyloid plaque in aged animals.

Previous trials have also showed that co-administration of CoQ10 with other substances capable of preventing mitochondrial damage such as alpha lipoic acid or vitamin E was more effective than administration of CoQ10 by itself.
Studies also show that CoQ10 may be an effective agent for the treatment and prevention of Alzheimer’s type dementia. Another important function of CoQ10 is its role in the production of cellular energy throughout the body.

In a study where CoQ10 and PQQ, were used together, participants received 20 mg of PQQ and 300 mg of CoQ10 per day.
The effects achieved by this combination were compared to the effects of CoQ10 by itself. The duration of the study was 12 weeks after which the patients were put through a battery of tests to assess their memory and cognitive function.
The study was performed in 71 middle-aged and elderly patients, 22 of which received the PQQ alone, 24 received the PQQ and CoQ10 and 23 patients comprised the placebo group.
No adverse effects were linked to the supplementation and the results showed that PQQ had a beneficial effect on cognition and memory, with the addition of CoQ10 leading to even greater benefits.
The results demonstrated that PQQ, especially when combined with CoQ10 can be used to improve the mental status and quality of life in older patients.
PQQ also showed great promise for the prevention of age-related decline in mental status.

Neuroprotection
In response to a growing aging “first-world” population, the preservation and enhancement of cognitive function has taken on such a priority that a proliferative number of natural substances have been developed exclusively to address this cornerstone field of preventative health.
Many of these substances are herbal in nature, and while effective in their own right, may not be the equal of vitamins in their natural propensity to perform a biochemical function, and this is where PQQ may distinguish itself in this proliferative field.
In fact, a double-blind, placebo-controlled clinical trial was conducted in Japan in 2007 to measure PQQ’s ability to ameliorate the symptoms of age related cognitive decline.
The proprietary study, conducted among healthy men and women aged between 40 and 70 years, saw the PQQ group outperform the placebo group by more than twofold in their standardized memory tests.
Even more impressive results were seen when PQQ was combined with Co-Enzyme Q10.

How It Works
Scientists believe PQQ’s neuroprotective benefits are due mainly to two functions attributed to it in this area thus far – anti-oxidative activity and Nerve Growth Factor (NGF) regeneration.
The former – in this case – is a defense against neurotoxicity due to the scavenging of the Reactive Oxygen Species (ROS) of free radicals in general and superoxide in particular.
In-vitro data has revealed that PQQ was more than 30 times more effective than Vitamin C or E in this capacity. Nerve Growth Factor (NGF) is a secreted protein that promotes the growth of peripheral nerve cells (neurons), and further in-vitro studies have revealed that PQQ can stimulate the synthesis of NGF by approximately 40-fold.

Market Trends
PQQ is a valuable antioxidant, one which is becoming increasingly popular on the supplement market. Taking it in combination with Co-Q10 has proven to offer even more benefits than taking it alone.
Some of the reasons that people are interested in taking this supplement are for the purposes of supporting heart health and cognitive function, promoting the formation of and protecting the mitochondria in each cell, to function as an antioxidant which acts as a free radical scavenger in the body and to promote overall cellular youthfulness.
While the debate to officially classify Pyrroloquinoline Quinone (PQQ) as a B-complex vitamin goes on within lofty administrative and scientific circles, the technology to utilize PQQ in effective quantities not practically obtained from foods is already here.
The impression PQQ has made in such a short period of time may prove to be a very promising harbinger of things to come.

AOR Advantage
PQQ is an essential nutrient, meaning that your body cannot produce it on its own and it must therefore be obtained from diet or supplements. More recent research indicates that PQQ’s unique nutritional profile supports heart health and cognitive function alone and in combination with Co-Q10. AOR’s formula combines both of these outstanding antioxidants in order to offer excellent antioxidant and neuroprotective activity.

recommended use
take 1 capsule with food, or as directed by your qualified health care consultant.

storage
keep dry and closed at normal room temperature between 15-22°C.
keep out of reach of young children

contra-indication
Consult a health care practitioner prior to use if you are taking blood pressure medication. Do not use when pregnant or nursing a baby.

vegans/vegetarians
suitable for vegetarians and vegans