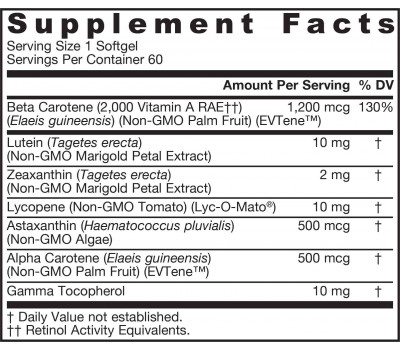 Jarrow Formulas CarotenAll contains alpha and beta-carotene extracted from palm fruit (Caromin) in ratios identical to carrots. One softgel of CarotenAll provides greater amounts of the major carotenoids (Alpha-, Beta-Carotene, Lutein, Zeaxanthin and Lycopene) than 5–6 servings of fruits and vegetables.

who can benefit from CarotenAll?
CarotenAll would benefit most adults as a recent study found that only a minority of adults met the guidelines for intake of both fruits and vegetables

what distinguishes CarotenAll?
• CarotenAll provides a combination of six dietary carotenoids in an amount equivalent to that found in 5-6 average servings of fruits and vegetables as well as gamma-tocopherol, a natural form of vitamin E
• it also contains alpha- and beta-carotene, here extracted from palm fruit, in ratios identical to that found in carrots
• Lycopene, Phytoene and Phytofluene are antioxidant carotenoids extracted from GMO-free tomatoes by Lyc-O-Mato

how does each active ingredient function in CarotenAll?
• alpha- and beta-carotene are distributed throughout the body and have been investigated in a wide range of biological roles, such as for improving lung function, serving as antioxidants, stimulating immune response and regulating cell death (apoptosis)
• Lycopene supports healthy prostate function and protects against damage from free radical singlet oxygen.
• Lutein and zeaxanthin concentrate in the eye's macula and lens and protect these tissues from oxidative stress
• Astaxanthin is a highly potent antioxidant carotenoid found in seafood and algae that protects lipids from peroxidation
• gamma tocopherol works synergistically with the carotenoids to reduce the free radical forms of one another

Here is a breakdown of the six reasons why eggs are such an awesome food choice
Read more
Pigmentation spots : why do we get them when we age?

Other common causes of skin discolorations are
Read more
LASIK eye surgery, is it safe?

In the past decade, LASIK eye surgery has boomed in popularity. It is easy to understand why: instead of wearing contacts or glasses, after surgery your eyes are corrected to result into (almost) perfect vision. However, sometimes we also hear horror stories: late 2016 Dutch television showed a program in which a house physician laments he's suffering from horrible neuralgic pains after having undergone laser surgery. Experts claim this is an extremely rare side effect from a specific type of LASIK surgery that nobody needs to worry about.
Read more
Protect your body against the dangers of aging

Gone are the days we were trying to perfect a beautiful bronzed skin. Somehow, a milky white skin has become fashionable again, probably induced by campaigns warning us against 'evil sunrays' as the primary cause of skin cancer.
Read more