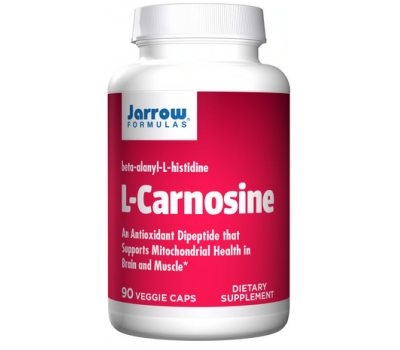 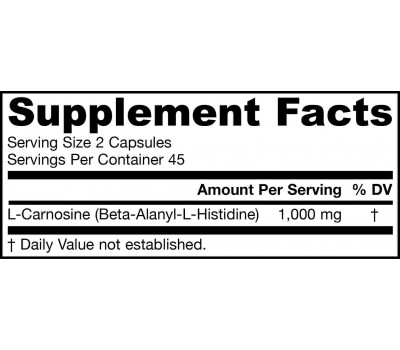 Jarrow Formulas L-Carnosine is a dipeptide that is found in the brain, heart, skin, muscles, kidneys and stomach.

how does L-carnosine function?
L-Carnosine supports healthy aging and cellular rejuvenation by its effects on two mechanisms: Glycation and Free Radical Damage.

Glycation is the uncontrolled crosslinking of sugar molecules to proteins and is implicated in loss of cell function, genome integrity and accelerated aging. L-Carnosine also protects against accelerated brain aging by reducing lipid peroxidation and stabilizing cell membranes.

background reading
L-Carnosine: the little dipeptide that could
Good things sometimes come in small packages. The amino acid derivative L-Carnosine is one of these. Chemically, it is a dipeptide (a molecule consisting of two amino acids) constructed from beta-alanine and L-histidine, hence its chemical name alanylhistidine.

L-Carnosine is found throughout the body, but it is particularly abundant in those cells which are long-lived, such as the nerve cells (neurons) and the cells of the muscles (myocytes). Similarly, L-Carnosine, as is true of the antioxidant enzyme superoxide dismutase (SOD), is one of a handful of compounds that are present in tissues at levels that correlate strongly with the maximum life spans of animal species. Research interest in L-Carnosine is focused on a number of issues arising from the ability of the compound to rejuvenate cells approaching senescence (failure due to advancing age).

Muscle levels of L-Carnosine decline approximately 63% between the ages of 10 and 70. Brain levels of L-Carnosine begin high and remain high in comparison with the levels found in most other tissues. Scientists have speculated that this may be one reason that brain functioning is stable into old age despite the brain’s dependence upon glucose for energy metabolism and the unusually high ratio of fructose to glucose in the brain. L-Carnosine supports healthy aging and cellular rejuvenation by its effects on two important mechanisms: glycation and free radical damage. It also detoxifi es aldehydes and chelates metal ions which otherwise might be free to cause damage by generating free radicals

Protecting against free radicals and more
Tests prove that L-Carnosine provides protection against a wide range of reactive oxygen species including the hydroxyl, superoxide, and peroxyl radicals as well as singlet oxygen. Such a breadth of protection makes L-Carnosine one of the most efficient of free radical scavengers and antioxidants available to the body.

Metal ions, such as copper and zinc, are closely linked to free radical generation. Indeed, changes in the brain’s copper-zinc metabolism are implicated in many age-related cognitive problems. L-Carnosine counteracts these effects not only by scavenging the radicals directly, but also by chelating excess metals and by buffering the pH (acid-base) of brain tissues.

Stopping the formation of AGEs & brain protein carbonylation
The proteins which make up the tissues of the body can readily be damaged as a result of oxidation and interactions with sugars or aldehydes.

Glycation refers to the oxidation of protein by glucose. In chemistry, these are sometimes called “browning” reactions, and, in fact, they are seen every time meats are “browned” by cooking. The result is a cross-linking of glucose or another sugar molecule to the protein, an action which effectively prevents the protein from acting properly.

Another and closely related type of damage to proteins is the formation of extraneous carbonyl (CO, carbon/oxygen) groups. Some authorities estimate that in older adults, one third of all proteins may become carbonylated, with a resulting decline in a variety of cellular functions. Glycation, the actions of aldehydes and peroxidation agents, etc., can all lead to protein carbonylation. L-Carnosine has been shown to “sacrifice” itself as a substitute victim to glycating agents, thus sparing the proteins and membranes which otherwise would have been the targets of glycation. Furthermore, there is evidence that L-Carnosine reacts with and removes the carbonyl groups of glycated proteins.

Promoting cellular rejuvenation
The ultimate test of cellular rejuvenation is the way in which an animal ages. A Russian study tested the effect of carnosine on life span and indicators of senescence in age-accelerated mice by giving half the mice carnosine in their drinking water starting at two months of age. At the conclusion of the study, the mice given carnosine were about twice as likely to reach the “ripe old age” of 12 months as were untreated mice.

recommended use
Take 1 capsule, 1 to 3 times per day with juice or water on an empty stomach, or as directed by your qualified health care consultant.