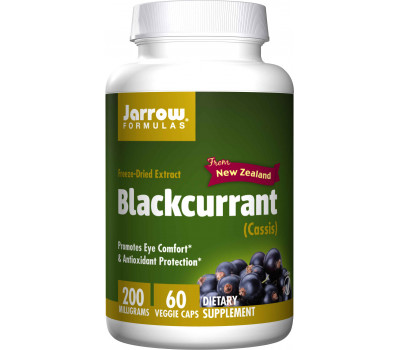 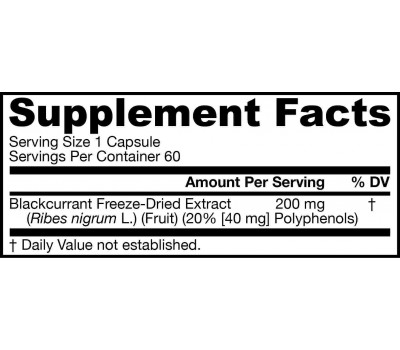 who can benefit from Blackcurrant freeze-dried extract?
Adults of all ages who are concerned about maintaining healthy eyes

New Zealand Blackcurrant is free of pesticides and grows in an unpolluted area with intense sunlight, which makes it naturally high in phenolic antioxidants.

The forgotten superberry: blackcurrant
As the 20th century began, blackcurrants were a popular fruit in the United States. However, in the first few years of the 1900’s the Northeastern U.S. was stricken by an outbreak of white pine blister rust that threatened many species of pine. Subsequently, it was determined that the blackcurrant plant was an integral host in the life cycle of this fungus. The lumber industry considered blackcurrant to be a danger to a thriving national industry and was able to get the plant black-balled with a federal planting ban. State bans were then instituted and only recently have many states lifted prohibitions on blackcurrant cultivation.

Lost for almost a century was the knowledge that the nutrient and antioxidant profile of blackcurrant significantly trumps blueberry, the purported “king of berries.” The antioxidant anthocyanins of blackcurrant have proven particularly useful in promoting eye health.

Blackcurrant & eye health
Delphinidin-3-rutinoside has shown specific activity in relaxing the ciliary smooth muscle of the eye; in myopia, or near-sightedness, the ciliary smooth muscle cannot relax enough to allow focusing on distant objects. In a study of frogs, cyanidin-3-rutinoside displayed some importance for the regeneration of rhodopsin. Rhodopsin is the primary photopigment of rod cells, enabling night vision. Two studies conducted in Japan have suggested increased blood flow to the optic papilla and reduced susceptibility to eye fatigue due to consumption of blackcurrant.

Some types of night blindness are treatable while other types aren’t. Once you know the cause of the problem, you can take steps to correct your vision.
Read more
Usefulness of herbal medicine in modern times

Today, plants are being used to treat a number of health concerns and conditions, including allergies, arthritis, migraines, fatigue, skin infections, wounds, burns, gastrointestinal issues and even cancer, proving that it’s true that food is medicine. These herbs are less expensive and they’re a safer means of treatment than conventional medications, which is why so many people are choosing to go back to this traditional idea of medicine.
Read more
LASIK eye surgery, is it safe?

In the past decade, LASIK eye surgery has boomed in popularity. It is easy to understand why: instead of wearing contacts or glasses, after surgery your eyes are corrected to result into (almost) perfect vision. However, sometimes we also hear horror stories: late 2016 Dutch television showed a program in which a house physician laments he's suffering from horrible neuralgic pains after having undergone laser surgery. Experts claim this is an extremely rare side effect from a specific type of LASIK surgery that nobody needs to worry about.
Read more

recommended use
Take 1 or 2 capsules per day with food, or as directed by your qualified health care consultant.