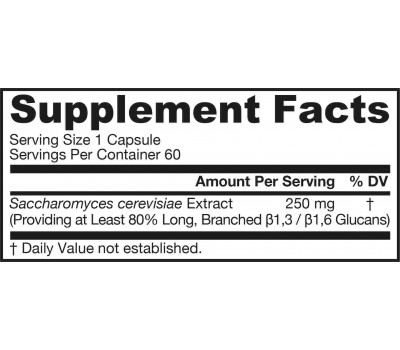 Jarrow Formulas Beta-Glucan contains beta glucans, which are natural bioactive carbohydrates, with those derived from certain yeasts and fungi being known for their ability to support immune function. Jarrow Formulas® Beta Glucan is a high purity extract from the cell walls of a proprietary Baker’s yeast (Saccharomyces cerevisiae) strain with a unique molecular structure comprised primarily of (1,3)-ß-linked glucose chains (>80%) and a relatively small number of (1,6)-ß-linked side chains.

Physical, emotional, and physiological stressors can all present recurring challenges to the human immune system. Beta glucans, naturally occurring polysaccharides found in the cell walls of grains, mushrooms, algae, or microbes, such as bacteria, fungi, and yeast (though not in mammalian cells) have been known for decades in clinical research to boost both innate and adaptive immune defenses from the effects of stress by enhancing the ability of immune cells to protect the body from stressors and foreign challenges.

While each source of beta glucan has its own unique structure of glucose linkages, purified, yeast-derived beta glucan from Baker’s yeast (Saccharomyces cerevisiae) is recognized as a “biological response modifier,” and considered to be the most effective source. Made from a patented beta 1,3/1,6 glucan extract of the cell walls of Saccharomyces cerevisiae, Jarrow Formulas’ Beta Glucan contains purified beta glucan for optimal absorption and efficacy.

Unique immunologic benefits.
Since the 1940s, research has highlighted the significant role of beta glucans on immune support, normal cell division, and the management of unwanted seasonal symptoms. After its ingestion, beta glucan molecules are processed by macrophages, which break them down into smaller fragments, after which they are bound to neutrophils. The neutrophils then become “primed” for chemotaxis, ready to provide support against microbial challenges and migrate to target sites with enhanced immune actions. Yeast beta glucans support immune function via various mechanisms, including the stimulation of natural killer (NK) cells, granulocytes, monocytes and macrophages; in addition, their recognition as a non-self-molecule serves as a unique stimulant for immune system activity. Beta glucans have also been found to balance inflammation and promote production of antioxidant enzymes. As a result, yeast-derived beta glucans support microbial balance, resistance to seasonal symptoms, normal cell division, blood sugar balance and more.

By increasing and potentiating monocytes and neutrophil activity, beta glucans are able to enhance the efficacy of conventional microbe- balancing therapies. Studies have found it to support the body’s normal response to a variety of micro-organisms, including viruses, bacteria and fungi. In one study on the effect of Saccharomyces cerevisiae-derived beta glucan on cytokine production and NK cell activity, beta glucan administration stimulated spleen cells to increase both interleuken-12 and TNF-alpha production, as well as NK cells. Its potent immune effects have also been found to support circulatory-related symptoms in the lower extremities, related to blood sugar imbalance.

Support for normal cell division
Beta glucan also promotes the normal replication of cells and has been shown to drastically down-regulate cells that suppress immunity. Soluble beta glucan has been found to significantly augment monoclonal antibody-mediated therapy via a complement activation pathway. In addition, yeast-derived beta glucan, in combination with antibody therapies that support normal cell division, has been shown to enhance longevity compared to either intervention alone, and to be superior to mushroom extracts in inducing cytokine secretion in dendritic cells.

Promotes seasonal respiratory health
One of the most notable immune-related benefits of beta glucans is its effect on unwanted winter seasonal symptoms and its support for upper respiratory health. Researchers have proposed its ability to promote production of secretory IgA as a possible mechanism for its beneficial effects. In a 2012 study of adult women, 12 weeks of a beta glucan supplement better supported upper respiratory health compared to placebo, and imparted an added benefit of improved sense of well-being and superior mental/physical energy levels and vigor. Another placebo-controlled, double-blind study from the same group found that marathon runners given 250 mg or 500 mg of beta glucan reported significantly better overall health, improved vitality and mood and increased vigor. Beta glucans have also been shown to support lower respiratory health in children in a double-blind, placebo-controlled study and to improve IgE-mediated seasonal nasal and respiratory complaints.

Here's a list of the most common poisonous foods that can kill your dog or cat.
Read more
How to prevent getting sick from the flu

How to prevent getting sick from the flu

You can prevent germs from making you ill in two ways: prevent entry into the body by careful hygiene, and if they do get in, make sure your body’s natural immune system is able to fight these germs, so they self-destruct before overwhelming the system.

Most flu germs are spread in two ways:

Read more
Why does stress make us sick more easily?

Why does stress make us sick more easily?

Most diseases that we are dealing with nowadays are chronic diseases as a result of poor lifestyle choices that will only affect us later in life. However, we can get sick much sooner when exposed to chronic stress. How can this happen?

Stress is defined as a series of events, starting with a stimulus leading to a stress response known as the 'fight-or-flight' reaction that can affect many body systems.
Physical or physiological stress is mostly short-lived, while psychological or emotional stress can last for a very long time.
Read more
PFAS pollutants causing turmoil

As we transition from summer into autumn, our thoughts automatically go to walks in the forest to enjoy the beautiful foliage and by consequence to the many beautiful mushrooms that flourish in this moist yet warm season.
There's a good reason mushrooms are so popular in nearly every world cuisine.

While low in carbohydrates and calories, mushrooms are a great source of B-vitamins, trace minerals, fiber and even offer some protein.
But mushrooms offer more, they have anti-inflammatory properties and contains high levels of beta-glucans that keep immune cells alert, plus a powerful antioxidant called ergothioneine that helps lower body-wide inflammation.

The medicinal use of mushrooms has a very long tradition in Asian countries that dates back thousands of years. Although their use in the Western Hemisphere only started increasing in the past several decades, numerous recent studies show that they are vital, biologically active compounds with significant benefits to health.

The earliest reports on the therapeutic use of metals or metal-containing compounds in cancer and leukemia date from the sixteenth and nineteenth centuries. They were forgotten until the 1960s, when the anti-tumour activity of an inorganic platinum complex called cisplatin was discovered. This led to the development of other types of non-organic cytostatic drugs.
Read more
How to prevent hay fever

How to prevent hay fever

It is that time of year again when we are hit most with hay fever attacks. Hay fever is caused by flowers, grasses and trees that rely on wind for pollination and shed pollen in large amounts.
Up to 30% of people in European countries suffer from one type of hayfever or another, which means they get an allergic reaction to some type of pollen, with the most common one causing problems being birch and grass pollen. As most birch pollen is produced in April and grass pollen season starts in May, both April and May can be called 'hay fever' months.
Read more

recommended use
Take 1 capsule per day on an empty stomach with a full glass of water, or as directed by your qualified health care consultant.