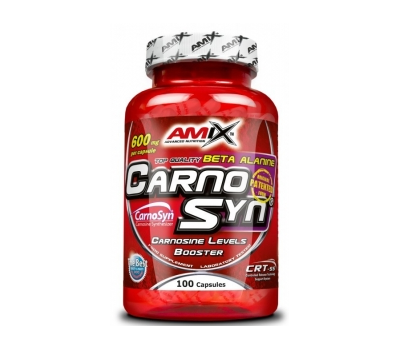 Carnosyn Beta-alanine contains beta-alanine, a nutritional ingredient, a non-protein amino acid, which is used by the body to be stored in the fast twitch muscle fibers as muscle carnosine. Carnosine itself works as lactic acid buffer and allows the muscle to perform the same bout of exercise without sacrifying performance. Translated for bodybuilders this means that they can training with more intensity and more often because of there faster recovery from exercise. The same applies to athletes who seek performance and just muscular hypertrophy.

Trouble with creatine
In general creatine is great ergogenic muscle building agent but in some athletes or for certain sports it is not the solution for better performance, those who do not respond well or at all to supplemental creatine should try procarnosin or combine creatine with Beta-alanine

Carnosyn Beta-alanine's main ingredient beta-alanine is thoroughly research and found to be safe for use by humans and animals. The dose is depending on the weight of the athlete (human or animal). Yes beta-alanine is beneficial for equine athletes as well. Actually one the best research done on athletic performance and beta-alanine is done with horses.

Beta-alanine by itself can be hard on the nerve endings causing a tingling sensation which can be described as needles touching your skin surface.

Although you may first hear of Beta-alanine just now, many top professional athletes have preceded you and are constantly improving their performance.

carnosine precursor
Beta-alanine is a non-protein amino acid that is stored in the muscles as carnosine where it works as a lactic acid buffering agent allowing the muscle to perform the same amount of work load many times more when the muscles would normally fail when supplemented with a placebo. Beta-alanine allows the fast muscle fibers to recover twice as fast from a workload than with a placebo. This will allow the muscle to grow stronger and bigger. The ideal supplement for those wanting to gain muscle strength but need the stamina as well.

Carnosine and muscles
Carnosine was discovered and described in 1900 by Russian scientist W.S. Gulewitsch. A decade later, he identified its constituent amino acids, beta-alanine and histidine. In the late 1930s, a study on the buffering capacity of carnosine in muscle was published. Gulewitsch’s disciple, S.E. Severin, showed that isolated frog muscle preserved an excitation-induced response significantly longer when carnosine was present. Carnosine allows muscle to accumulate large amounts of lactate without a significant drop in function.

Lactic acid (or lactate) accumulates in muscles during intense exercise, sometimes causing a “burning” sensation to occur. As lactic acid concentrations increase, muscle strength, power and endurance normally decrease. The acidity also hampers the production of new muscle tissue. However, carnosine helps stabilize muscular pH by soaking up hydrogen ions during exercise, acting as a first line of defense against muscle fatigue. In fact, carnosine constitutes 10-20% of the total buffering capacity in type I and II muscle fibers. Although it occurs naturally in both type 1 and 2 muscle fibers, carnosine is significantly more concentrated in type 2 (fast-twitch) fibers. Type 2 muscle fibers are used primarily in high intensity workouts and are more responsive to muscular growth. Overall it appears that the greater the concentration of carnosine that is present in muscle, the more sustained lifting, running and biking (i.e. total work output) that is possible.

Advantages of beta-alanine over carnosine
When carnosine is taken orally, only a small amount remains intact. Most carnosine is hydrolyzed into histidine and beta-alanine and then synthesized back into carnosine by the body. A more efficient and cost-effective process can involve supplementing with beta-alanine.

Weight trainers and other athletes looking to gain muscle mass and increase strength are often limited by muscle carnosine levels. Ageing is also associated with lower muscle carnosine. Carnosine or beta-alanine supplementation is capable of taking people to the next level. By boosting carnosine levels with beta-alanine, type 2 muscle fi bers soak up more acid to keep muscles from tiring, helping maintain maximal strength and endurance throughout workouts.

How long before benefits are noticed?
Performance benefits typically occur in as little as two weeks, although some individuals will notice benefits sooner. As carnosine levels increase, the benefits will follow. Some nutritionists suggest that three months of beta-alanine supplementation may be required before carnosine levels are optimized.

Beta-Alanine is a naturally occurring, non-essential amino acid that promotes improved athletic performance. It is the limiting amino acid needed for the production of another amino acid, L-carnosine, an important intracellular buffer for muscle fibers. Beta-Alanine has been shown to increase the levels of intramuscular carnosine, resulting in enhanced athletic performance by increasing energy output, maximizing endurance and facilitating recovery. For optimal results, take with creatine and carnitine products.

A few days ago, an article showed up in my newsfood about a remarkable result of research done on the Hadza tribe in Tanzania, which still leads a traditional hunter-gatherer lifestyle.
Despite walking an average of a multiple of ten thousands of steps every day, they barely need more calories than the average couch potato in a Western country.
That same day I discussed with an old friend who had read the same news story. He told me how he had trained for a marathon in the past, but barely dropped any weight while doing so. Only when he spent a week on liquid foods at a spa, he succeeded in losing weight which he mostly thanks to the relaxed environment. Otherwise it was next to impossible. Apparently his body really clung to its precious body fat!
But how was this possible? We didn't really know though we had our suspicions. I I could tell much about the same story. Yes, I'd drop weight pretty fast in the first few weeks of the cycling season or on a longer cycling holiday, but would get stuck at my regular (still too heavy) summer weight while I wasn't really inhaling tons of food. Except then for the Route des Cent Cols during which I could barely eat enough to stay fit and sleep well for all those mountains.
Let's find out more about this particular research!
When Herman Pontzer set off for the rugged savannah of Tanzania to spend a summer with the local Hadza people, he thought he knew what he would find. As an evolutionary biologist, his aim was to measure how the Hadza’s hunter-gatherer lifestyle causes them to burn more energy. Because we all know the more exercise you do, the more calories you burn and the slimmer you become, right? Well no, not exactly.
“Don’t expect any meaningful weight change in the long term from exercise alone.”
What Pontzer and his fellow researchers discovered flew in the face of received wisdom about how our metabolism works. Although the Hadza lead far more active lives than ours – routinely walking long distances, they undertake more physical activity daily than the typical American does in a week – their energy expenditure was no greater. They were burning the same number of calories as men and women from industrialised populations. Our bodies, concluded Pontzer, seem to maintain daily energy expenditure within a narrow window, no matter what lifestyle we lead. While obesity is largely caused by overconsumption, it appears there’s little we can do to change the calories we burn.
Read more
Set point and holiday weight gain

At the time of writing this article the first week of advent has almost finished. In this week most people will have started decorating their homes for the holiday season that is upon us.

Though for most this period may not be as festive as it normally is, since it is not allowed to organize large gatherings because of COVID-19, we can still try to make the most of it and indulge in the small pleasures of life.
Quite a lot of people that are trying to become fit and trim worry about the holiday season and what damage it will do to their progress: how can they avoid weight gain during those days?
We can reassure the worryworts: you will be fine to indulge on those special days. With emphasis on 'special' days as nothing spectacular will happen when you eat normal on the other days. The bigger problem is when you spread out those days over an extended period of say two to three weeks.
But even with a longer period of dietary negligence, most people notice it is surprisingly easy to get rid of the extra holiday weight, due to a wonderful (and scary) phenomenon called 'set point'.
Read more
Exercise and immunity: staying fit at home

Read more
About us

MM2K was a magazin based in Denver, Colorado that was founded and led by Bill Philips, who would later on become famous as a co-author of the book 'Body for Life'.

At the time, MM2K was a revolutionary magazine because they didn't tell you lies about doping use in sports and bodybuilding and strength sports in particular, unlike other magazines that were solely focused on inspirational stories and faking how bodyubuilding was a doping-free sports.

By contrast, MM2K wrote openly about doping, supplements, nutrition, training, and other gossip stories about health, sports and politics.
MM2K had great contributing authors, such as Bill Philips himself, Dan Duchaine who was seen as the 'mad scientist' and Charles Poliquin, a well-respected personal trainer. Dan Duchaine wrote extensively about diet drugs, which he wrote down in his booklet 'Dirty Dieting', which would become the starting point for more diet books written by Lyle McDonald.

contra-indications and warning
a high intake of beta-alanine may lower taurine levels: it is recommended to supplement with taurine