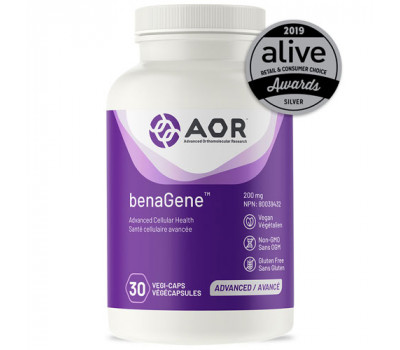 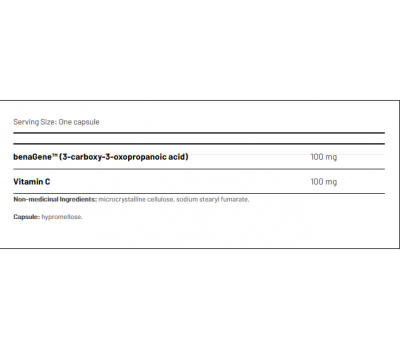 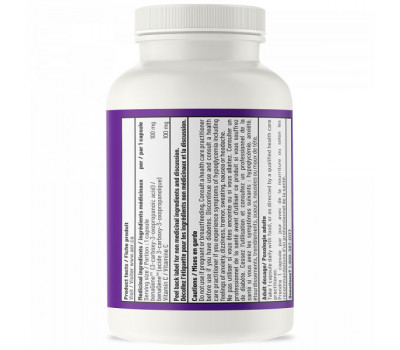 AOR BenaGene contains 3-carboxy-3-oxopropanoic acid or oxaloacetic acid, which is a key intermediate in the Kreb's Cycle.
Studies demonstrate that AOR benaGene mimics a caloric restriction diet, which has been shown to increase the expression of beneficial genes associated with increased life span, health span, weight management and blood glucose reduction.

The Benefits of Calorie Restriction
benaGene contains a key intermediate in the Kreb's cycle which has been shown to mimic the beneficial effects of a caloric restriction diet. Caloric restriction has been associated with an increased average and maximal life span in several species, along with reductions in weight and blood glucose.

Longevity Genes
The benefits of caloric restriction involve the increased expression of longevity genes. benaGene has been shown to mimic the changes in expression of over 350 genes in a similar fashion to caloric restriction. It also increases the conversion of the cellular factor NADH to its oxidized form NAD. NAD is critical to producing cellular energy, and stimulates these beneficial genes while NADH inhibits them.

Extended Health, Extended Life
The genetic shifts mediated by benaGene help to delay the onset or reduce the incidence of several age-related diseases including cancer, diabetes, cardiovascular disease and neurological disease. Human trials have found that benaGene reduces glucose levels and improves glucose uptake. benaGene is formulated to be very stable and easily absorbed by the body, improving chances for a long and healthy life.

background reading
Immortality is an age old Holy Grail. A phenomenon of the ego. A topic best left to science fiction and Hollywood. The search for it is often beset with tragedy, as was the case of Juan Ponce De Leon and his quest for the legendary fountain of youth.

However, life extension is a realistic goal and a proven physiologic phenomenon in diverse organisms through various interventions, such as exposure to certain stresses (ionizing radiations, heat or osmotic shock) or caloric restriction.

There are several ways of extending life span but the key is to match the gain in years with a corresponding increase in vigour and vitality. In other words, adding years to life has to be concurrent with adding life to years. Ideally increasing both maximal life span and health span. The latter can be assessed by monitoring various disease-risk markers such as lowered blood glucose levels, Hb1Ac, isoprostane F2, reactive oxygen and nitrogen species, lipid markers, age-amadori adducts, and different inflammatory markers such as C-reactive proteins.

The process of aging has been ascribed to various mechanisms including: (1) increased metabolism and thus increased production of reactive oxygen species, (2) reduction of apoptosis (or programmed cell death), (3) increased glucose/insulin and insulin-like growth factor 1 (IGF-1) signalling molecules, (4) disruption of the daf-2 pathway, (5) effect of longevity genes (including FOXO, Sir-2, and INDY (I am not dead yet)), (6) NAD+/NADH ratio, and others.

Caloric restriction optimal nutrition (CRON) extends life and health span in a wide variety of organisms and has been shown to delay the onset or reduce the incidence of many age-related diseases, including cancers, diabetes, cardiovascular diseases and neurological diseases (including Parkinson's and Alzheimer's). Furthermore, a significant improvement in various disease risk parameters has been conclusively shown in humans.

Thanks to the pioneering work of professors Leonard P. Guarente (of the Massachusetts Institute of Technology) and David A. Sinclair (of Harvard University), research has revealed that certain longevity genes are activated during caloric restriction. Moreover, their work showed that this effect was evident at any age; in other words, life extension could be achieved in older age groups as well. Gurante and other researchers believe that this effect may be related to the critical ratio of the ubiquitous co-enzymes NAD+ (the oxidized form of NAD, or nicotinamide adenine dinucleotide) and its reduced form NADH. NAD is a niacin-derived coenzyme that is present in all living cells and is critical to the production of ATP - the body's primary source of all immediate energy. Higher NAD+ levels are thought to have a stimulatory effect on the beneficial genes whilst a high NADH concentration is thought to inhibit such genes. Hence a high NAD+/NADH ratio may prolong life and health span.

BenaGene is a novel caloric restriction mimetic (CR mimetic). It mimics the changes in the expression of over 350 genes in a similar fashion to caloric restriction and thus may be considered a true nutrigenomic compound. The resulting (and astonishing) increases in average and maximal life span, reduction in weight, and reduction in glucose levels have been observed in various species.

Human clinical trials have confirmed both reduction in glucose levels and an improved uptake of glucose without negative side effects (and hence an effective hypoglycaemic agent). BenaGene work on a "biological diode" thereby increasing the conversion of NADH to NAD+ as well as on resulting changes in the electrical state (Gibbs free energy) and critical signalling molecules.

BenaGene is the world's first novel and natural Krebs cycle intermediate compound that is specifically formulated to be highly stable and bio-available so that a one-a-day dosage is all that is required, offering the potential of life and health extension.

recommended use
Take one capsule daily with food or as directed by a qualified health care practitioner.

contra-indication
Do not use during pregnancy and lactation