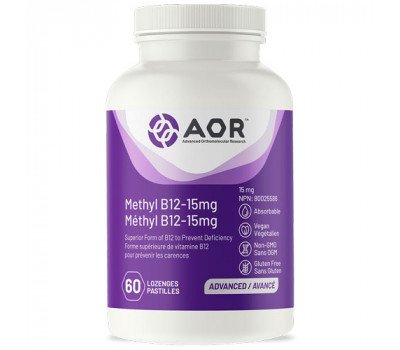 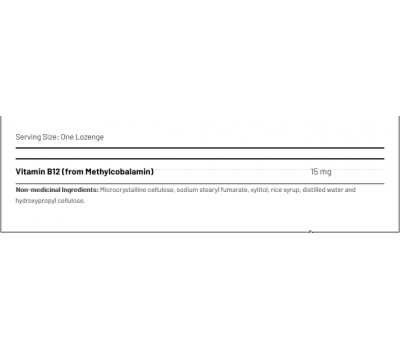 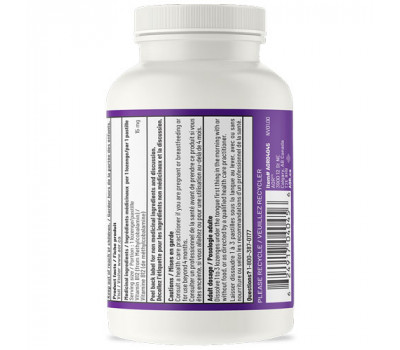 AOR Methylcobalamin Ultra 15mg is an ultra-high dose formulation of methylcobalamin, which is a source of vitamin B12 and helps to prevent vitamin B12 deficiency. B12 is important for energy production, cardiovascular health and a good night's sleep
Methyl B-12 is an important cofactor that is needed to reduce toxic homocysteine to the essential amino acid methionine. Methylcobalamin also protects eye function against toxicity caused by excess glutamate.

who benefits from using Methyl B-12?
The largest group that will benefit from supplementing with B12 are vegans and vegetarians who consume no or very small amounts of animal-derived proten.
Furthermore there's a group of people who lack adequate amounts of the so-called 'intrinsic factor' which is essential for B12-absorption in the intestines. This intrinsic factor is made by the stomach. People who produce very little stomach acid or who take medicin that reduce stomach acid production like antacids, which reduces B12-uptake.
Another group are those that are gluten-intolerant but who consume too much gluten, which damages the villi in the gut where B12-absorption takes place.
The major advantage of these sublingual tablets is that absorption takes place in the mouth through the mucus of the cheek into the blood vessels, so a lack of intrinsic factor is bypassed, just like with B12-injections.

Some signs and symptoms of a vitamin B12 deficiency can include high homocysteine, pernicious anemia (a type of autoimmune disorder that destroys certain stomach cells), mood changes, memory problems and neurological symptoms due to nerve damage.

It is now suggested that vitamin B12 deficiencies occur more often from malabsorption than from low intake. This means that B12 deficiencies may be more prevalent than was previously thought.

Methylcobalamin, the coenzyme form of vitamin B12, is beneficial for those whose bodies fail to properly convert regular B12 to the usable form in the body. Vegetarians often take vitamin B12 supplements since dietary B12 is largely obtained from meat.

While the RDA (Recommended Dietary Allowance) for vitamin B12 in Canada is just 2.4 micrograms and the upper limit is just 1 milligram, AOR’s Methylcobalamin Ultra provides an ultra-high, clinically effective dosage of the most bioavailable form of vitamin B12 in a convenient and pleasant tasting lozenge form.