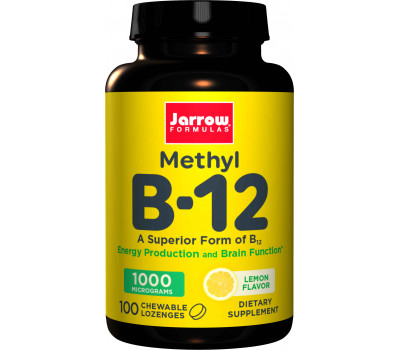 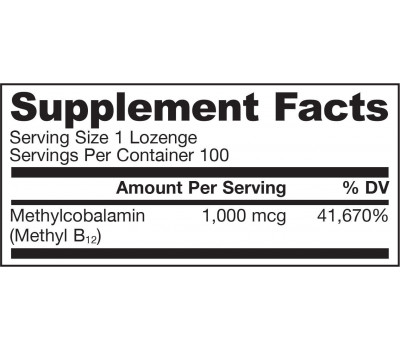 Jarrow Formulas Methyl B12 1000mcg (1mg) with methylcobalamin is better absorbed and retained than other forms of B12 (such as cyanocobalamin). Methyl B-12 protects nerve tissue and brain cells, and promotes a good night sleep. Methyl B-12 is an important cofactor that is needed to reduce toxic homocysteine to the essential amino acid methionine. Methylcobalamin also protects eye function against toxicity caused by excess glutamate.
One of the important functions of methyl-B12 is to assist in the creation of oxygen-rich blood cells. People with a B12-deficiency will notice to not lack in muscle strength but get out of breath more rapidly with heavy exertion.

who benefits from using Methyl B-12?
The largest group that will benefit from supplementing with B12 are vegans and vegetarians who consume no or very small amounts of animal-derived proten.
Furthermore there's a group of people who lack adequate amounts of the so-called 'intrinsic factor' which is essential for B12-absorption in the intestines. This intrinsic factor is made by the stomach. People who produce very little stomach acid or who take medicin that reduce stomach acid production like antacids, which reduces B12-uptake.
Another group are those that are gluten-intolerant but who consume too much gluten, which damages the villi in the gut where B12-absorption takes place.
The major advantage of these sublingual tablets is that absorption takes place in the mouth through the mucus of the cheek into the blood vessels, so a lack of intrinsic factor is bypassed, just like with B12-injections.

The 5 mg dose is intended for those diagnosed with a deficiency that needs to be taken care of as soon as possible, while lower doses are useful for a maintenance phase.

Why B12 Is Important
Methylcobalamin (methyl B12) is the most bioavailable and best utilized form of vitamin B12. Methyl B12 is more effective than traditional forms of B12. Methyl B12 is well retained and is active without the need for conversion by the body unlike other forms.

Clinical studies have documented methyl B12 efficacy in slowing the effects of aging on nerve tissue. Methyl B12 also appears to help balance brain chemicals and promote neurotransmitter synthesis to improve communication between nerve cells. Studies also demonstrate B12’s ability to reduce high blood homocysteine levels, a pro-oxidant marker that has been linked to arterial injury and other health concerns.

Methyl B12 Is The Superior Form of Vitamin B12
Methyl B12, as the active coenzyme form of the vitamin, possesses numerous distinct advantages over the other forms of this nutrient.

Enhanced Utilization
Methyl B12 is excreted in urine at about one-third that of cyanocobalamin (the most common form in vitamin supplements), indicating substantial tissue retention.

Reduced Homocysteine Levels
Methyl B12 is a catalyst for the conversion of homocysteine to methionine, an essential amino acid. It also helps remove other toxins ( e.g. , arsenic) from the body.

Highlights of current research:
Brain Aging
Methyl B12 has been shown to prevent brain degradation from glutamate-, aspartate-, and nitroprusside-induced cell toxicity.

Nerve Function
Methyl B12 supports nerve function by contributing to nerve myelination. It has also been shown to stimulate protein synthesis for repair and neural regeneration. Irregular Cell Growth
Administration of methyl B12 has been shown to facilitate normal cell division in mice.

Sleep Patterns
Methyl B12 supports better 24-hour sleep patterns by raising melatonin (the sleep hormone) earlier in the evening to induce sleep, and decreasing it earlier in the morning to make waking easier.

Diet is a major risk factor for vitamin B12 deficiency. The best sources of vitamin B12 are animal products, such as meat, eggs, and fish. Therefore, strict vegetarians (those who eat no animal products) are at considerable risk. One study reported vitamin B12 deficiency in 58% of vegetarians.
• Most Bioavailable Form of B12 with Superior Tissue Retention
• Reduces Levels of Toxic Homocysteine
• Assists in Nerve Cell Regeneration
• Supports the Production of Neurotransmitters Important for Energy and Mood

recommended use
dissolve in mouth or chew one lozenge every 2 or 3 days with a meal, or as directed by a qualified physician.
The 1mg version can also safely be used every day in case of a low B12-status or a very high demand.
When the B12-status is very low, we advise to start with a daily dosage of the 5mg version for the first 2 weeks.