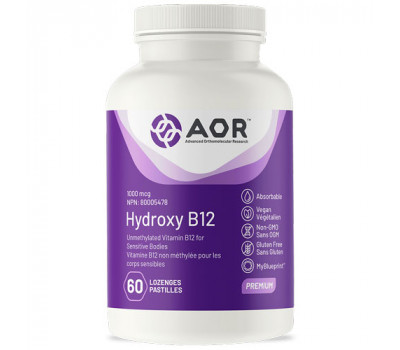 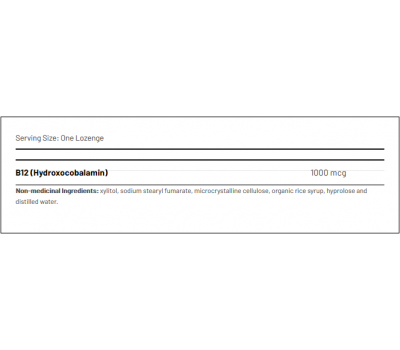 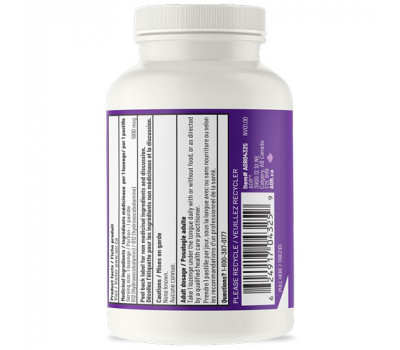 AOR Hydroxy-B12 1mg - hydroxocobalamin is a unique form of vitamin B12, which is more readily converted into the coenzyme forms than conventional cyanocobalamin. Hydroxocobalamin also readily binds body stores of cyanide, unlike conventional cyanocobalamin., which already includes cyanide in its structure. Hydroxocobalamin can be converted into both adenosyl- or methylcobalamine, which are the two versions of B12 made in the body. This makes hydroxy-B12 an interesting option if you hesitate between the various forms of B12.

who benefits from using B-12?
The largest group that will benefit from suppletion with B12 are vegans and vegetarians who consume no or very small amounts of animal-derived protein.
Furthermore there's a group of people who lack adequate amounts of the so-called 'intrinsic factor' which is essential for B12-absorption in the intestines. This intrinsic factor is made by the stomach. People who produce very little stomach acid or who take medicin that reduce stomach acid production like antacids, which reduces B12-uptake.
Another group are those that are gluten-intolerant but who consume too much gluten, which damages the villi in the gut where B12-absorption takes place.
The major advantage of sublingual tablets is that absorption takes place in the mouth through the mucus of the cheek into the blood vessels, so a lack of intrinsic factor is bypassed, just like with B12-injections.

background reading
The Roles of B12
Hydroxy B12 is hydroxocobalamin, an unusual form of vitamin B12. This vitamin is essential for the health of the brain and nervous system, and protects nerves from degeneration. Vitamin B12 is also an important part of the crucial biological pathways known as methylation cycles. The active coenzyme form of B12 that is used by the body is methylcobalamin. The conventional form of supplemental B12 is cyanocobalamin, but this form must be converted into methylcobalamin before the body can use it. Hydroxocobalamin bypasses a step of this conversion, and is therefore more readily turned into an active and useful form.

When cyanide is present
While the majority of people will benefit most from taking methylcobalamin itself, hydroxocobalamin offers unique benefits to individuals who may have cyanide toxicity. Hydroxocobalamin binds cyanide to make it easier for the body to get rid of it, and it also enhances the chemical’s detoxification.

A unique supplement
AOR’s Hydroxocobalamin delivers the essential functions of standard vitamin B12 while at the same time ridding the body of cyanide, all in a convenient and reliable lozenge form.

Better Than Regular B12
Hydroxocobalamin is a unique form of vitamin B12, which is more readily converted into the active coenzyme form than conventional cyanocobalamin. Many vitamins, including B12, are not biologically active in the form in which they are normally found in food. In these cases, the body has to convert a vitamin into its coenzyme form in order for the vitamin to exert its biological function.

The Different Forms of B12
The body uses vitamin B12 in the form of two different coenzymes, each of which plays a different role in the body. Adenosylcobalamin was discovered earlier, and is the better-known of these coenzymes. Methylcobalamin is the other coenzyme form of B12. Methylcobalamin prevents the creeping numbness, dementia, and spongy degeneration of the nerve cells seen in B12 deficiency. Adenosylcobalamin helps the body to process some amino acids, and to form substances used in the body’s energy cycle. One coenzyme can’t substitute for the other, any more than you can use your house keys to start your car.

Thus, while a person getting enough of the basic vitamin (cobalamin) will always have plenty of adenosylcobalamin, the nervous system has no special store of protective methylcobalamin on which to rely. In fact, the body’s methylcobalamin “fuel tanks” can easily be brought below optimal levels, and the supply is quickly depleted if it is not constantly replenished.

An Easier Conversion
When you take a regular B12 (cyanocobalamin) supplement, the body must first convert its B12 into hydroxocobalamin in order to form the B12 coenzymes. This involves the removal and detoxification of the cyanide molecule, followed by biochemical reduction, and then the enzymatic conversion of the reduced cobalamin into one of two metabolically active coenzyme forms.
By taking a preformed hydroxocobalamin supplement, you can skip over this first biochemical stumbling block, allowing for unhampered formation of adenosylcobalamin and methylcobalamin.

Read more
Common foods that are dangerous for our pets

Here's a list of the most common poisonous foods that can kill your dog or cat.
Read more
Skin hunger: why we crave touch

Read more
Which nutritional supplements can you give to your pet?

Which nutritional supplements can you give to your pet?

Just as many pet parents are paying more attention these days to the quality of food they feed their companion animals, they are also realizing the potential benefits of nutritional supplements.

Supplements are becoming more and more recognized as a valuable component of a comprehensive care program for pets.

Read more
What is the relationship between religion and food?

recommended use
Dissolve one lozenge under the tongue daily or as directed by a qualified health care practitioner.