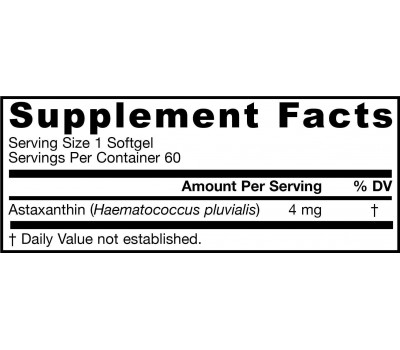 Jarrow Formulas Astaxanthin 4mg is a natural antioxidant carotenoid derived from the fermentation of the microalgae Haematococcus pluvialis.
Clinical studies have demonstrated that Astaxanthin may promote a healthy inflammatory response, supports skin during exposure to sunlight and supports joint and eye health.
Most Astaxanthin research has been conducted with daily intakes of between 4 and 12 mg.

Natural astaxanthin has a different complement of isomers than synthetically produced astaxanthin, like that commonly fed to farm- raised salmon. Naturally-derived astaxanthin is also typically found in the form of esters and protein conjugates, whereas synthetic astaxanthin is not. These differences may alter the effects of astaxanthin in humans.
Jarrow Formulas astaxanthin is naturally harvested from Haematococcus pluvalis microalgae grown in environmentally-friendly sustainable ponds.

Some types of night blindness are treatable while other types aren’t. Once you know the cause of the problem, you can take steps to correct your vision.
Read more
What are free radicals?

Yet, free radicals are essential to life. The body's ability to turn air and food into chemical energy depends on a chain reaction of free radicals. Free radicals are also a crucial part of the immune system, floating through the veins and attacking foreign invaders.
Read more
Protect your body against the dangers of aging

Gone are the days we were trying to perfect a beautiful bronzed skin. Somehow, a milky white skin has become fashionable again, probably induced by campaigns warning us against 'evil sunrays' as the primary cause of skin cancer.
Read more

recommended use
Take 1 softgel per day, preferably with a meal or as directed by your qualified health care consultant.