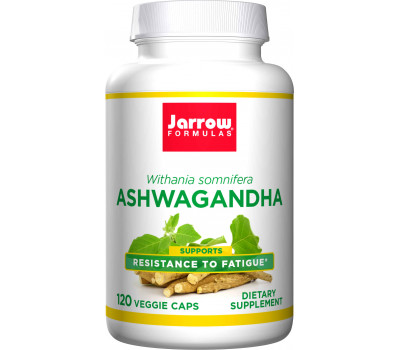 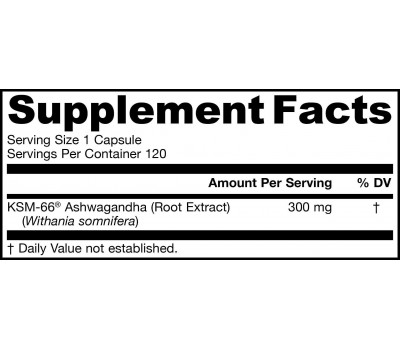 Jarrow Formulas Ashwagandha has been used in the Indian tradition of Ayurveda to improve musculoskeletal function and as a tonic to improve overall health. Experimental studies demonstrate that Ashwagandha is an antioxidant that supports joint mobility and resistance to fatigue. Ashwagandha has shown to improve sperm motility as well and that is evident in the response of male actors in the adult entertainment industry who are very enthusiastic about this herb.

Ashwagandha (Withania somnifera), also known as Indian ginseng, winter cherry, Ajagandha, Kanaje Hindi and Samm Al Ferakh, is a plant in the Solanaceae or nightshade family. Ashwagandha means "horse's smell" in Sanskrit, probably originating from the odor of it's root, which resembles that of sweaty horse.

The species name somnifera means "sleep-bearing" in Latin, indicating it was considered a sedative, but it has been also used for sexual vitality and as an adaptogen. Some herbalists refer to Ashwagandha as Indian ginseng, since it is used in Ayurvedic medicine in a way similar to how ginseng is used in traditional Chinese medicine.

Anecdotally it is certain male actors who made fame in the adult entertainment industry contribute in the fact that it really does give men an advantage over those not using the herb.

important
do not see Ashwaghandha as alternative for regular or medicinal hormone replacement therapy (HRT), Ashwagandha is a natural herb that allows individuals to recover from physical stress. Ashwagandha does NOT raise testosterone as claimed by other manufacturers, but can aid in gaining back virility and sexual appetite. For adolescent boys Ashwagandha can help them progress from boy to manhood.

KSM-66® is a registered trademark of Ixoreal Biomed Inc.

Withania somnifera is a small, woody shrub native to the Indian subcontinent and can be found growing wild in the Mediterranean region. It is most commonly referred to by its Sanskrit name, ashwagandha, which means “horse’s smell,” but occasionally it is called Indian ginseng. Ashwagandha has a long history of use in Asia for strengthening the constitution of the body.

The major biochemical constituents found in ashwagandha are steroidal alkaloids and steroidal lactones that are collectively called withanolides. The withanolides appear to act as important regulators of hormonal processes in a balancing—adaptogenic—manner. When there is an excess of a certain hormone, the basic theory contends, ashwagandha constituents occupy receptor sites so that the effect of the hormone is muted. However, when the hormone level is low, ashwagandha constituents actually stimulate the receptor to exert a small effect. This can lead to a state-dependent balancing, or adaptive, effect. One area in which this is important is with the stress response.

Adaptogenic Ashwagandha
When a human being encounters a stressful situation, the body automatically triggers the stress response. This involves the release of a number of signaling molecules from the adrenal glands that lie atop the kidneys. Epinephrine (adrenalin) and norepinepherine initiate the “flight-or-flight” response. Glucocorticoids, such as cortisol, alter blood-pressure, blood sugar, digestion, immune function, and even bone growth. Mainly, this concerted response is meant to mobilize resources to increase the chances of survival in the present and to avoid “wasting” energy for housekeeping and repair functions. This is an amazingly adapted survival response, when faced with occasional, stressful situations.

However, if the stress response is constantly activated, the body runs into problems. Constantly elevated blood sugar levels can lead to changes in insulin sensitivity, while decreased housekeeping functions and a diminished immune response are problematic over the long-term. Unfortunately, this is essentially what occurs with chronic stress (CS). And this is why immune suppression, irregularities in glucose homeostasis, elevated blood pressure, and other physiological effects are associated with CS and, particularly, with chronically elevated plasma glucocorticoid levels. Ashwagandha is believed to help modulate the activity of these messengers and temper their message.

In addition, animal studies of ashwangadha extracts have been found to elicit a positive effect on the body’s natural antioxidant defenses. Ashwagandha has been found to support levels of reduced glutathione, superoxide dismutase, catalase and glutathione peroxidase, while also providing protection against lipid peroxidation. Depleted antioxidant defenses are another biomarker of extended stress on the body.

recommended use
stress management
take 2 capsules twice a day with a glass of water or tea, 30 minutes before a meal.

virility
take 1 capsule twice a day with a glass of water or tea, 30 minutes before a meal.