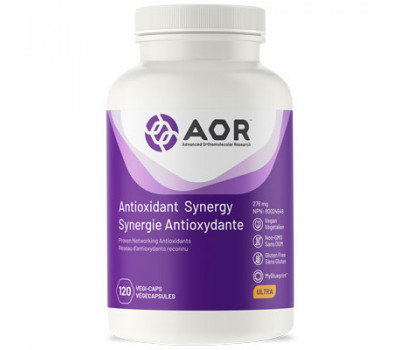 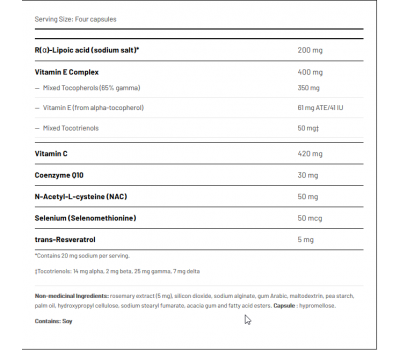 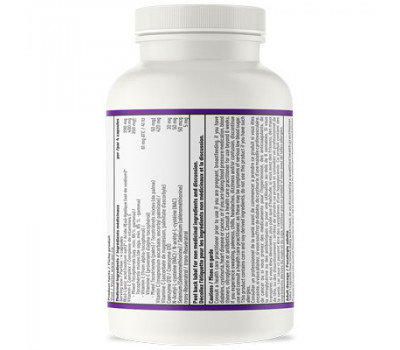 The Free Radical Threat
During the normal metabolism of cells, oxidation reactions produce harmful byproducts known as free radicals. These highly reactive molecules react with DNA, protein and other cellular components, causing a great deal of damage. In the process, they produce more free radicals in a chain reaction. Antioxidants are compounds that are able to quench free radicals and stop them from causing cellular damage.
However, most antioxidants become mild free radicals themselves in this process, which, in the long term can cause harm if not dealt with.

An Antioxidant Tag Team
The body contains 5 antioxidants that are able to recycle other antioxidants, keeping them in their active states. These include R+ lipoic acid, the vitamin E complex, vitamin C, glutathione (for which N-acetylcysteine is a precursor) and coenzyme Q10.
These 5 work together to enhance and extend each other’s antioxidant capacities. Other compounds act as antioxidant boosters, including bioflavonoids such as carnosic acid from rosemary, and selenium.

Cellular protection
AOR’s Antioxidant Synergy contains the five antioxidant powerhouses to keep cells working optimally, along with the boosters to help their actions have the most impact.

The Antioxidant Solution
The potential for slow-acting pathology from "radicalized" antioxidants can be prevented through taking advantage of the unique synergistic interactions of an elite antioxidant strike force: the Networking Antioxidants.

When taken together, these specific, biologically essential nutrients form a dynamic team of synergistic "co-antioxidants." Networking antioxidants can "recycle" one another from their "radicalized" forms back into their active, antioxidant forms. There are exactly five networking antioxidants: R (+)-lipoic acid, the vitamin E complex (including the four tocopherols and four tocotrienols), vitamin C, coenzyme Q10, and glutathione (produced from N-acetylcysteine)

However, a few antioxidants do play a supporting role to networking antioxidants, without fully participating in the antioxidant network recycling system. The best understood of these Network "boosters" are bioflavonoids and the mineral selenium. Among bioflavonoids, carnosic acid - which is found in the herb rosemary - is especially interesting because of its ability to repeatedly rearrange itself into a "cascade" of new antioxidant "booster" forms before being exhausted. Selenium supports the network by maintaining the body's supply of two key enzymes.

You'll want to ensure that you're taking the complete team of networking antioxidants, plus rosemary extract, resveratrol, and selenomethionine, as proven "boosters" of the Network itself .

recommended use
Take 1 capsule four times daily with food, or as directed by your qualified health care consultant.

contra-indication
If you have diabetes, cystinuria, are pregnant, lactating, or trying to conceive, are under the age of 18, or are taking blood thinners, nitroglycerin or antibiotics, consult your health care practitioner before using this product.