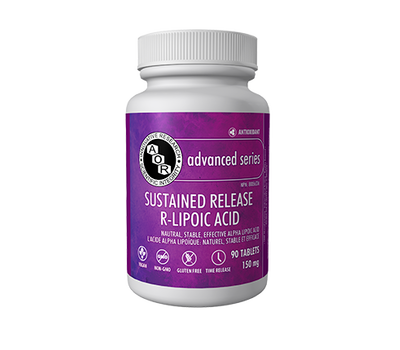 Lipoic acid is a versatile antioxidant known for its ability to protect the brain and nerve cells from free radicals and heavy metals that promote cognitive and neurodegenerative diseases. Lipoic acid is known as the “captain of the antioxidants” due to its ability to recycle and recharge other antioxidants such as vitamins C and E. Numerous studies have shown that lipoic acid can balance blood sugar and repair damaged nerves in diabetics.
Additionally, this powerful anti-aging nutrient has been shown to mimic some of the effects of caloric restriction, the only proven method of extending health span and lifespan. It does so by protecting the mitochondria, the tiny power plants inside of each of the body’s cells, against free radical damage.
Due to its action on the mitochondria it can revive damaged cells, especially those found in nerves and in the liver. It is an ideal partner for glutathione, the most powerful antioxidant produced in the body.

In 2005, AOR introduced the world’s first sustained release pure R-lipoic acid. Unlike most conventional alpha-lipoic acid supplements, AOR’s 95% pure R-lipoic acid delivers the most effective form of this valuable antioxidant without the negative actions of S-lipoic acid. Since lipoic acid has a very short half-life, R SR has been designed to be slowly released into the blood stream over a period of 8 hours.
R SR’s new tablet form allows for a better sustained release formula, designed and manufactured by AOR’s research team in our state of the art facility.

R-Lipoic acid is a powerful, natural and well-rounded antioxidant with many mechanisms of action such as repairing nerves, balancing blood sugar, protecting the brain and increasing energy formation in the mitochondria. The sustained release formula gives you continual antioxidant protection around the clock for many health conditions or for general health and longevity.

background reading
A New & Improved Formula
AOR’s popular, world-first R SR returns in tablet form. This new and improved formula developed by our Research and Development team in our new facility is cleaner and provides solid research data behind its sustained release mechanism.

The right form and lifespan of lipoic acid
Alpha lipoic acid (ALA) is an extraordinary antioxidant. Unfortunately, its effectiveness has been limited on two fronts. Firstly, supplemental lipoic acid has been manufactured with the R and S- enantiomers – two molecules with the same chemical formula but with different structures.
The R form is naturally occurring and the beneficial effects of alpha lipoic acid come from the R isomer. The S form however is artificial, a byproduct of the manufacturing process and is harmful because it is thought to prevent the utilization of the R enantiomer. This is especially detrimental with ALA because the molecule has a very short half-life in the body, estimated at 22 minutes; the second shortcoming of this molecule.

The solution is, in theory, simple. For ALA to be considered a viable treatment for diabetes, the molecule must confer protection for longer than the 22-minute half-life currently limiting its effectiveness.
Sustained release ALA formulations allow for constant improvements in insulin sensitivity and the results obtained in human trials done with sustained release R( )-lipoic acid are impressive.

Absorption
ALA is absorbed in the small intestine, carried to the liver via the portal circulation and distributed throughout the body by the systemic circulation. ALA is a small molecule that is readily assimilated in a non-saturable fashion in doses of 50 to 600 mg. It is naturally present in food although in very small quantities.
Supplemental ALA reaches doses that are hundreds of times higher than what is found in food. ALA was thought to be a vitamin in humans and animals but it has since been shown that it is endogenously produced. The R form of ALA is more active and more absorbable. ALA can cross the blood brain barrier and, after its absorption, it is found intramitochondrially as well as intra and extra cellularly. It therefore prevents oxidative damage both inside and outside our cells and mitochondria throughout the body.

The antioxidant effect associated with Lipoic Acid may confer protection in cases of diabetes, diabetic neuropathy, mitochondrial dysfunction, liver disease, lactic acidosis and could even help control the replication of the human immunodeficiency virus.

One of the 5 networking antioxidants
Alpha lipoic acid and DHLA form a redox couple capable of recycling antioxidants and are involved in cellular energy production. Incredibly, the antioxidant potential of ALA extends to both the reduced and oxidized form of the molecule. Supplementation with Alpha Lipoic acid decreases plasma protein carbonyls, markers of oxidative stress. The molecule recycles important antioxidants such as vitamin C, vitamin E, glutathione and ubiquinone.

Anti-aging antioxidant in the mitochondria
There is evidence that lipoic acid is an anti-aging agent. The key to the anti-aging effect of ALA lies in its ability to protect the mitochondria from oxidative stress. It has been demonstrated that as we age, our mitochondria slowly become less and less efficient at producing energy. This loss of efficiency results in an increased production and release of free radicals, which injure the cell and the mitochondria, leading to a harmful and destructive cycle.

High blood sugar and its neural complications
Alpha lipoic acid is indicated for the treatment of any condition where elevated blood glucose levels and free radicals are involved in the disease process. Both of those mechanisms cause problems in several degenerative processes and are both thought to impact the aging process significantly. Alpha lipoic acid can be used to prevent cataract formation, because it can inhibit the enzyme aldose reductase involved in the formation of lens opacities. Supplementation with this antioxidant also improved biochemical parameters in patients suffering from glaucoma and lead to improvements in visual function.

Help warding off the effects of high blood sugar early
In healthy people, the benefits are not to be overlooked either. Free radicals, which are quenched by (R )-lipoic acid, are well known for their injurious effect on health. They damage body structures, oxidize lipids, injure blood vessels, can lead to DNA mutations, contribute to inflammation and are thought to play a key role in degenerative disorders. On a different front, elevations in blood glucose levels damage proteins and lipids. Indeed, sugars and their intermediates will attach to amino acid residues and lipids leading to the formation of advanced glycation end products and advanced lipoxidation end products. As we age, insulin sensitivity decreases which contributes to increases in blood glucose levels, which accelerates the glycation/lipoxidation process. This leads to the loss of function in cellular structures and speeds up the aging process. Alpha lipoic acid offsets this course by increasing insulin sensitivity, which enhances glucose uptake by cells and decreases blood sugar levels.

While it is fairly easy to spot hypoglycemia from shaky hands, acute headaches and listlessness, it is not so easy for hyperglycemia, unless your blood sugar reaches a dangerously high level. Then you may experience the same symptoms such as listlessness but also excessive thirst and blurry eye vision.

recommended use
take 1 tablet twice daily with or without food or as directed by your qualified health care consultant.

storage
keep dry and closed at normal room temperature between 15 - 22°C.
keep away from young children