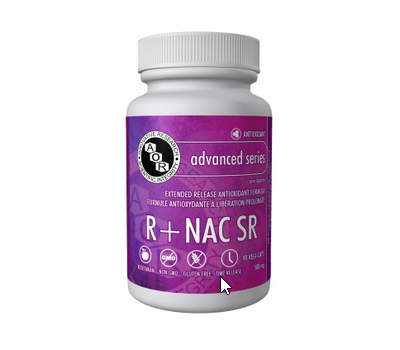 AOR R+NAC SR provides R+lipoic acid and N-acetyl-L-cysteine in an advanced timed-release formula to extend their benefits over 8 hours or more.
The R+ form is the only biologically active form of lipoic acid, and NAC is the most effective enhancer of the all-important antioxidant glutathione (GSH). R+NAC SR provides antioxidants for the maintenance of good health.
AOR guarantees there is no more than 5mg of S-lipoic acid per capsule and no ingredients not listed on the label have been added to the product.

background reading
Extraordinary Antioxidants
R(+) lipoic acid is one of the best weapons against free radicals, the waste products that injure blood vessels, damage DNA, contribute to inflammation and lead to neurodegenerative diseases. R(+) lipoic acid is naturally produced in the body and is found right inside the cellular powerplant known as the mitochondria where free radicals are produced. R+ lipoic acid provides protection to cells both inside and out and also helps to reduce the damaging effects of age. NAC is a highly efficient form of cysteine and has a number of health benefits. Cysteine is the most important precursor for glutathione (GSH), one of the body’s hardest working antioxidants. R+ Lipoic acid and glutathione recycle each other and other antioxidants, keeping them fighting off freeradicals longer.

Sustained Release
Lipoic acid and NAC tend to be very short-lived in the blood. R + NAC SR is specially formulated to ensure greater stability and accessibility to the body than conventional lipoic acid and NAC supplements. It is designed to provide a sustained release of these nutrients over 8 hours, providing continuous resistance to free radical damage and numerous other health benefits.

Anti-Aging Antioxidants
The work of antioxidants is essential for maintaining good health. Antioxidants protect cellular and mitochondrial membranes and DNA from free-radical damage. This seemingly simple mechanism protects the body from many common conditions including inflammation, atherosclerosis, neurodegenerative conditions, and liver disease. R+ lipoic acid works in the mitochondria where cellular energy production occurs. Glutathione, produced in part by NAC, is one of the body’s most versatile antioxidants. R+ lipoic acid and glutathione are two of the body’s networking antioxidants, helping to keep antioxidants active in the body for longer. With aging, the body produces fewer of its own antioxidants and sustains more free-radical damage, accelerating aging. Antioxidants therefore delay the aging process! In fact, R+ lipoic acid has demonstrated benefits similar to those associated with the anti-aging-focused caloric restriction diet! Animal studies have even shown an increased lifespan and healthspan with R+ lipoic acid!

Heart Health
NAC is a highly effective reducer of lipoprotein (a), homocysteine and LDL oxidation, all of which are significant contributors to heart disease. Both NAC and lipoic acid reduce heart damage that can occur due to a lack of oxygen.

Detox & Chelation
Both NAC and lipoic acid help chelate toxic metals like iron and arsenic as well as excessive trace metals like copper from the body, protecting the brain and nerves from neurological damage. NAC also protects against numerous other environmental toxins and protects the liver from damage by toxins such as acetaminophen. NAC helps with detoxification by producing optimal amounts of GSH for reactions that make harmful compounds less toxic.

Diabetes, Neurological Health, Immunity and Mucolysis
Lipoic acid is known for its positive effects in regulating blood sugar and insulin activity. It also protects nerves against the side effects of diabetes, such as neuropathy and cataracts. As an antioxidant, it helps protect against neurodegenerative conditions, especially since the R+ form of lipoic acid crosses the bloodbrain barrier. Studies have shown improvements in animal models of Alzheimer’s, Parkinson’s and other neurodegenerative diseases with supplemental lipoic acid. There is also recent interest in NAC’s effects on insulin resistance and Alzheimer’s disease. Illnesses that involve reduced glutathione levels, such as HIV, can be improved by taking NAC, while R+ lipoic acid may help control HIV replication. NAC also has a mucolytic effect and helps break up excess mucus in conditions like chronic bronchitis and COPD (chronic obstructive pulmonary disease).

Sustained Release and Half-Lives
Lipoic acid has a very short half-life, or time to peak activity, of about 22 minutes. This means that even if you take a high dose all at once, you’ll get lots of antioxidant protection, but only for a short time. For NAC, although its half-life is about 2 hours, most of the NAC consumed gets used up by intestinal cells and the liver first, leaving little for GSH production and antioxidant activity. A timed-release formula such as R + NAC SR overcomes such issues, releasing these two powerful nutrients over the span of 8 hours or more and providing effective health benefits and antioxidant protection around the clock.

recommended use
take 1 capsule 3 times daily with protein-containing meals or as directed by your qualified health care consultant.

storage
keep dry and closed at normal room temperature between 15 - 22°C.
keep away from young children