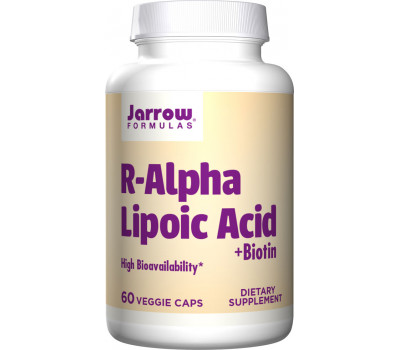 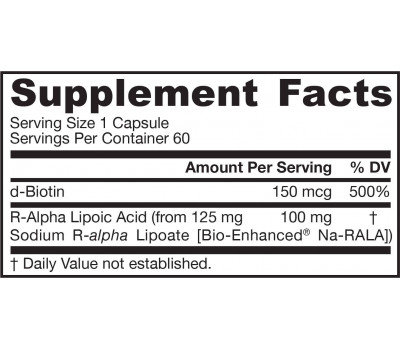 Jarrow Formulas R-Alpha Lipoic Acid w biotin is a unique lipid and water soluble antioxidant that is a co-factor in energy production, helping to regulate glucose metabolism. ALA also promotes the synthesis of glutathione. Biotin is added for optimum ALA activity.

R-Alpha Lipoic Acid is a disulfide molecule (containing two thiol groups). A thiol (or -SH) consists of a sulfur and a hydrogen atom. This unique anti-oxidant is both lipid- and water-soluble, a potent promotor of glutathione synthesis and a co-factor in energy production, helping to regulate glucose metabolism. Biotin is added for optimum ALA activity.

Alpha Lipoic Acid is the most abundant anti-oxidant produced in the liver, which serves as a liver detoxifying agent combined with N-Acetyl Cysteine to cleanse the liver by increasing Glutathione production in the liver .

who can benefit from R-Alpha Lipoic Acid?
Adults who are interested in enhancing energy production, sugar and lipid metabolism, and antioxidant protection.

R-Alpha Lipoic Acid: natural form of alpha lipoic acid
Most alpha lipoic acid (ALA) products contain a racemic mixture of R-Alpha Lipoic Acid (R-ALA) and S-Alpha Lipoic Acid (S-ALA). Generally, equal amounts of R- and S- forms are produced during the chemical synthesis of alpha lipoic acid, and thus, these products contain R-ALA and S-ALA in an equal ratio of 1:1. However, R-ALA is the only form of lipoic acid that is endogenously synthesized in humans and other organisms. Human pharmacokinetic studies have shown that peak concentrations of R-ALA are 40-50% higher than S-ALA after oral supplementation of racemic preparations, suggesting that R-ALA may have better absorption and bioavailability. In animal studies, R-ALA supplementation has shown better biological effects such as insulin-stimulated glucose transport and metabolism, and antioxidative status. Thus, R-ALA may provide superior health benefits compared to racemic mixtures (R-ALA and S-ALA) or S-ALA alone.

Energy production and glucose and lipid metabolism
One of the major functions of R-ALA is to enhance energy production via improved mitochondrial functions. R-ALA is a disulfide compound and it is naturally found in mitochondria as a coenzyme for pyruvate dehydrogenase and alpha-ketoglutarate dehydrogenase, directly helping mitochondrial energy production. It also helps mitochondria as an efficient antioxidant by reducing oxidative stress that may impair or slow down mitochondria. Further, R-ALA is known to stimulate healthy glucose metabolism. In clinical studies, supplementation significantly improved blood glucose levels and insulin activity and sensitivity without any side effects. In these subjects, the incidences of impaired sugar metabolism and associated conditions were considerably reduced. This efficient glucose metabolism seems to contribute to healthy lipid metabolism as well.

Powerful anti-oxidant
R-ALA works in many ways to enhance cellular antioxidant status. For example, supplementation of lipoic acid significantly increases biosynthesis of glutathione, a potent antioxidant that protects cells from reactive oxygen species. In vitro studies have shown that lipoic acid stimulates the expression of gamma-glutamylcysteine ligase, the rate limiting enzyme in the glutathione synthesis pathway, as well as cellular uptake of cysteine, an amino acid required for glutathione synthesis, resulting in an overall increase in intracellular glutathione by 30-70%.

Some of the R-ALA absorbed from the diet or synthesized in the body can be reduced into DHLA (dihydrolipoic acid), an active antioxidative form of R-ALA. Studies have shown that DHLA plays a key role in recycling many antioxidants including vitamins and other molecules involved in various redox systems. For example, it has been reported that DHLA is superior in its ability to regenerate vitamin C from its oxidized form compared to glutathione. DHLA can also reduce alphatocopherols directly or do so indirectly by reducing vitamin C, which then reduces oxidized alpha-tocopherol. Similarly, DHLA reduces oxidized glutathione and prevents lipid peroxidation. These recycled antioxidants, such as vitamin C and glutathione, can further recycle other antioxidants such as vitamin E, keeping the “antioxidant network” active. Lastly, DHLA interacts with NADPH- or NADHdependent electron transport systems to recycle vitamin E.