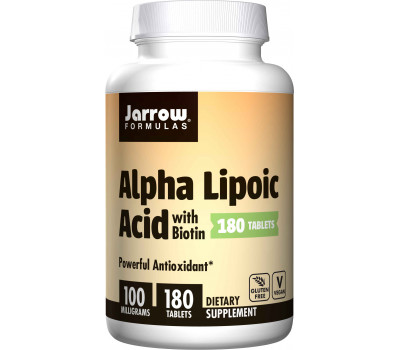 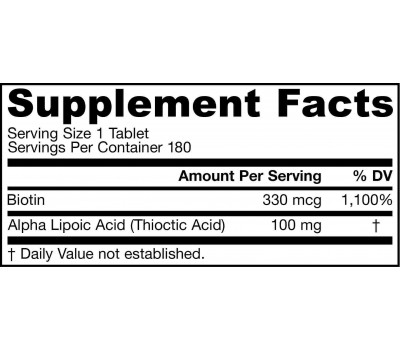 Jarrow Formulas Alpha Lipoic Acid is a unique lipid and water soluble antioxidant that is a co-factor in energy production, helping to regulate glucose metabolism. ALA also promotes the synthesis of glutathione. Biotin is added for optimum ALA activity.

Alpha Lipoic Acid is a disulfide molecule (containing two thiol groups). A thiol (or -SH) consists of a sulfur and a hydrogen atom. This unique anti-oxidant is both lipid- and water-soluble, a potent promoter of glutathione synthesis and a co-factor in energy production, helping to regulate glucose metabolism. Jarrow Formulas Alpha Lipoic Acid is made in Europe. Biotin is added for optimum ALA activity.

Alpha Lipoic Acid is the most abundant anti-oxidant produced in the liver, which serves as a liver detoxifying agent combined with N-Acetyl Cysteine to cleanse the liver by increasing Glutathione production in the liver .

important
It is frequently stated that that the R- form of alpha lipoic acid is better and more stable than the mixed form. These claims have NOT been verified by other studies other than the one present by marketeers of R-ALA supplements and the respective manufacturers of R-ALA. All of the peer reviewed studies done on ALA have been done with the mix form NOT the R-ALA form which is not stable enough during production.

background reading
Alpha lipoic acid (aka ALA, lipoate or thioctic acid) is utilized as an antioxidant and co-factor in glycolysis. Glycolysis is the initial process in most of the body’s pathways to breakdown glucose into useful forms of energy. Though critical to life, ALA is not a vitamin because it can be synthesized from essential fatty acids and the amino acid L-cysteine. However, no food is rich enough to serve as a good source.

Chemically, ALA has two juxtaposed sulfur atoms. When oxidized, the two sulfurs bond together (disulfide form). When reduced to dihydrolipoic acid, the active antioxidant form, each sulfur atom attaches to hydrogen (thiol form). ALA’s antioxidant chemistry is similar to glutathione, another sulfur-containing molecule and the most abundant antioxidant inside cells.

The Universal Antioxidant
Under normal conditions, ALA is reduced to its active form, dihydrolipoic acid, inside cells as the body needs it. Like vitamin C, ALA functions in water-based phases such as blood. However, like vitamin E, it also protects fatty tissues and membranes. ALA quenches free radicals—such as hydroxyl, singlet-oxygen, and peroxynitrite—in both water and lipid phases, and protects against lipid peroxidation. Altogether, it deactivates an unusually wide array of cell-damaging free radicals in many bodily systems.

Antioxidant Rejuvenator
ALA enhances the potency of other antioxidants in both water-based (blood, cytosol) and lipid (membrane, blood lipids) compartments. It recycles vitamin C directly and vitamin E indirectly in a unique and significant capacity, often preventing the symptoms of deficiency of these two critical vitamins.

Importantly, ALA increases glutathione levels in cells, in part by facilitating L-cysteine availability. It maintains the ratio of reduced- to-oxidized coenzyme Q10, which impacts mitochondrial health and energy production.

Blood Sugar Metabolism and Muscular Energy
ALA also plays an important role in energy production from carbohydrates, participating in the multi-enzyme process on many levels. ALA stimulates insulin activity and enhances glucose burning in overweight laboratory animals. Similarly, glucose utilization was supported in humans. This has implications for athletes and the overweight since muscle activity requires efficient sugar metabolism.

Longevity and Mitochondrial Biogenesis
ALA is currently being studied for many age-related conditions, including heart and vascular health, sugar balance, neurological function, immune function, as well as fatigue and muscle strength. ALA finds particular utility in the eyes and brain, with neuroprotective and possibly cognitive-enhancing effects, especially in combination with acetyl-L-carnitine.

The true protective promise of ALA may stem from its effects on cellular health throughout the body, especially with regards to mitochondria. The acetyl-L-carnitine + alpha-lipoic acid combination can positively impact aging cells by restoring mitochondrial function and decreasing oxidative biomarkers of mitochondrial inefficiency. In addition, they may not only make mitochondria more efficient, but may also support the generation of new mitochondria (i.e. mitochondrial biogenesis). This makes Jarrow Formulas’ Acetyl L-Carnitine a worthwhile companion to ALA.

The Importance of Biotin
Since biotin and ALA are transported by the same mechanism, elevated dietary ALA can interfere with biotin absorption and co- enzyme functions. And much like the ALA and acetyl-L-carnitine combination, biotin seems to support mitochondrial efficiency and even mitochondrial biogenesis. To protect against biotin deficiency, Jarrow Formulas’ Alpha Lipoic Acid contains over 100% of the recommended daily allowance for biotin.

recommended use
take 1-6 tablets a day, preferably with a meal and a glass of water or an acidic fruit juice , or as advised by a qualified physician