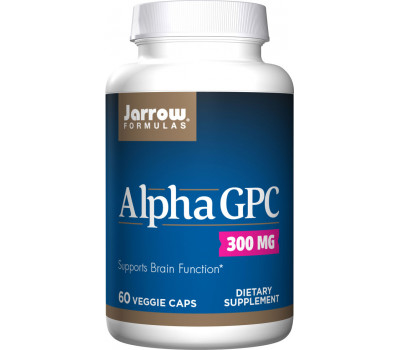 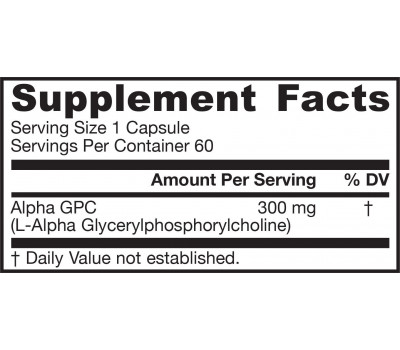 Jarrow Formulas Alpha GPC is a phospholipid metabolite and precursor found concentrated in neuronal membranes. It is able to cross the blood brain barrier where it supports the synthesis of acetylcholine and neuronal phospholipids that are critical for cognitive function.

properties Alpha GPC
• supports learning by increasing the amount of major neurotransmitter acetylcholine
• acetylcholine allows for better information processing due to better transfer of data
• improves the signal transmission between neurones in the brain and central nervous system as well as with muscles in both direction
• may improve muscle strength due to better conduction of signals in neural networks and muscles
• thanks to the increase in acetyl choline, more bonds will form between actin and myosine, two major proteins which result in better muscle contractions, resulting in more muscle strength
• choline alfoscerate or Alpha GPC is along with omega-3 fatty acid DHA responsible for male fertility because of improved motility in sperm cells
• only contains the superior choline alfoscerate which is free of undesirable residues.
• is not banned by WADA, which means it can safely be used by competing athletes

L-Alpha glycerylphosphorylcholine (alpha GPC, choline alfoscerate) is a choline compound naturally found in the human body and in dietary sources such as milk and soy. It is concentrated in the brain, especially in neuronal membranes, where it acts as a precursor to phosphatidylcholine. Phosphatidylcholine, despite often being referred to in the singular, is actually a class of phospholipids that contain an invariable alpha GPC moiety and two variable fatty acids. In the nervous system, phosphatidylcholines play important roles in membrane fluidity and membrane-mediated cellular signaling processes.
Alpha GPC also provides choline for the synthesis of acetylcholine (ACh), an important neurotransmitter involved in many functions in both the central and peripheral nervous systems. In the central nervous system, ACh is critical to the overarching processes of attention, focus, and plasticity that undergird learning and memory.
Alpha GPC is readily absorbed in the digestive tract and effectively passes the blood-brain barrier. Clinical research utilizing alpha GPC has concentrated on functional cognitive effects and neuronal protection.

Cognitively Alpha
A good amount of alpha GPC research has involved simulating cognitive decline and memory impairment in humans through the administration of scopolamine, a renowned compound found in species of the nightshade family, and determining the protective effects of alpha GPC. This is a useful model because scopolamine depletes acetylcholine stores, inducing a transitory cognitive impairment similar to that observed in normal aging. In vitro and animal studies have suggested that alpha GPC enhances hippocampal cholinergic transmission (critical for memory) by increasing acetylcholine synthesis and release.

Generates protection cortically
When choline availability declines, cholinergic cells go through autocannibalism to withdraw choline from phosphatidylcholine.
However, when the choline or phosphatidylcholine supply is not replenished, cells lose their ability to efficiently communicate due to the loss of membrane phospholipids that are critical for signal transduction and normal cellular functions. Supplementation of alpha GPC can help replenish both choline and phosphatidylcholine, which help maintain healthy neuronal membranes and neurotransmitter production.
In one study, animals given alpha GPC were observed to display adaptive and reparative reactions such as an increased number of ribosomes and hypertrophy of endoplasmic reticulum and Golgi complex.
Furthermore, the structures of the nuclear membranes and cellular organelles were better preserved compared to animals given the common nootropic agent piracetam. In addition, in vitro work using human brain slices has found that alpha GPC inhibits lysophospholipase, thus modulating membrane phospholipid breakdown and protecting neuronal cells from self-degradation.

Brain bioavailability
The pharmacokinetic profile of oral alpha GPC has been investigated in male and female rats given alpha GPC radio-labeled with either 14C-glycerol or 14C-choline. Hours after ingestion, both species were found concentrated in the brain. Furthermore, the labeled choline was observed in brain phospholipids within 24 hours of dosing. Excretion of labeled alpha GPC was minimal and comparable for both forms. These results suggest that oral alpha GPC is well absorbed, efficiently crosses the blood brain barrier, and concentrates in the brain.

recommended use
general: take 1 capsule twice a day with a meal or as directed by your qualified health professional
training: take 1 or 2 capsules with ample water or fruit juice 30 minutes before a training session

contra-indication
if you have a medical condition, or are taking medications, consult your healthcare professional before using this product.