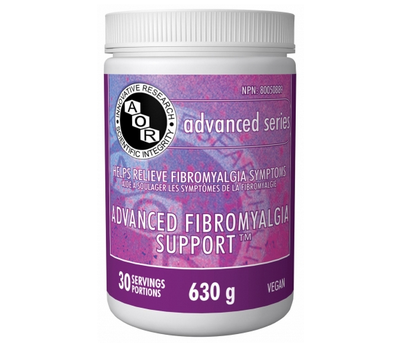 background reading
The primary symptom of fibromyalgia is muscle pain, although it is often accompanied by fatigue, mood changes, sleep difficulties and memory problems.
The cause is often unclear, but several nutrients have shown good success in improving its symptoms.

Advanced Fibromyalgia Support is the first fibromyalgia product to provide high doses of several of the most effective and commonly used supplements to help reduce the symptoms of fibromyalgia, including d-ribose, magnesium malate and 5-HTP.

Magnesium Malate for Fibromyalgia Symptoms
In a randomized, placebo-controlled study in twenty-four patients with primary fibromyalgia, 3 tablets twice a day of Super Malic were administered for 4 weeks, followed by a 6-month, open study where the dose was gradually increased up to 6 tablets twice daily.
Each tablet contained 200 mg of malic acid and 50 mg of magnesium.
During the 6-month follow up, significant reductions in the severity of all 3 primary pain/tenderness measures were obtained without limiting risks.

D-Ribose for Increasing Energy Levels and Improving Fibromyalgia
41 patients with a diagnosis of fibromyalgia and/or Chronic Fatigue Syndrome were given D-ribose, a naturally occurring pentose carbohydrate, at a dose of 5 g three times a day for a total of 280 g.
D-ribose, which was well-tolerated, resulted in a significant improvement in all five visual analog scale (VAS) categories: energy, sleep, mental clarity, pain intensity, and well-being, as well as an improvement in patients’ global assessment.
Approximately 66% of patients experienced significant improvement while on D-ribose, with an average increase in energy on the VAS of 45% and an average improvement in overall well-being of 30%. D-ribose significantly reduced clinical symptoms in patients suffering from fibromyalgia and chronic fatigue syndrome.

5-HTP Provides Significant Clinical Improvements
A double-blind, placebo-controlled study of the benefits and tolerability of 5-hydroxytryptophan (5-HTP) was conducted in 50 patients with primary fibromyalgia syndrome in an open 90-day study.
All of the clinical parameters studied were significantly improved by treatment with 5-HTP with minimal side-effects reported.
The overall evaluation of the patient condition assessed by the patient and the investigator indicated a ‘good’ or ‘fair’ clinical improvement in nearly 50% of the patients during the treatment period.
Clinical variables studied throughout the trial included number of tender points, anxiety, pain intensity, quality of sleep and fatigue.
The study concluded that 5-HTP is effective in improving the symptoms of primary fibromyalgia syndrome and that it maintains its efficacy throughout the 90-day period of treatment.
Evidence from multiple studies support the idea of decreased activity through the serotonin pathway in fibromyalgia patients.
Serotonin supplementation, by using L-tryptophan or 5-hydroxytryptophan (5-HTP), has been shown to improve symptoms of depression, anxiety, insomnia and somatic pains in a variety of patients. Identification of low serum tryptophan and serotonin levels may be a practical method to identify persons who will respond well to this approach.
5-HTP is well absorbed from an oral dose, with about 70 percent ending up in the bloodstream. It easily crosses the blood-brain barrier and effectively increases central nervous system (CNS) synthesis of serotonin. In the CNS, serotonin levels have been implicated in the regulation of sleep, mood, aggression, appetite, temperature, sexual behaviour, and pain sensation.
Therapeutic administration of 5-HTP has been shown effective in treating a wide variety of conditions, including mood imbalances, fibromyalgia, binge eating associated with weight gain, chronic headaches, and insomnia.

While fibromyalgia is regarded as a 'modern disease' it has been around for much longer. The earliest description in the Western literature may be found in the book of Job : "My weary nights are filled with pain as though something were relentlessly gnawing at my bones.".
Read more

recommended use
Take 3 scoops daily with food, or as directed by a qualified health care practitioner.
Mix product well in 1-2 cups of liquid (water, juice, etc.) immediately before consumption.
To minimize the risk of gastrointestinal side effects, start with 1/2-1 scoop two to three times per day and slowly increase to effective dose over a 2 week period. Use for a minimum of
- 1 week to see beneficial effects in mood balance,
- 2 weeks for relief of fibromyalgia symptoms
- 2-3 weeks for migraine prophylaxis.
Ensure to adequately hydrate before, during and after exercise. Consult a health care practitioner for use beyond 1 year.

contra-indication
Consult a health care practitioner when pregnant or nursing.
Do not use if you have scleroderma.
Consult a health care practitioner prior to use if you are taking carbidopa or drugs/supplements with serotonergic activity including but not limited to L-tryptophan, S-adenosylmethionine (SAMe), St. John's wort, antidepressants, pain killers, over the counter cough and cold medication containing dextromethorphan, anti-nausea medication and anti-migraine medication, or if symptoms persist or worsen with use.
Discontinue use and consult a health care practitioner if you show signs of weakness, oral ulcers, or abdominal pain accompanied by severe muscle pain or if you experience skin changes.
Some people may experience drowsiness.
Exercise caution if operating heavy machinery, driving a motor vehicle or involved in activities requiring mental alertness.
Some people may experience diarrhea, nausea, vomiting and abdominal pain.