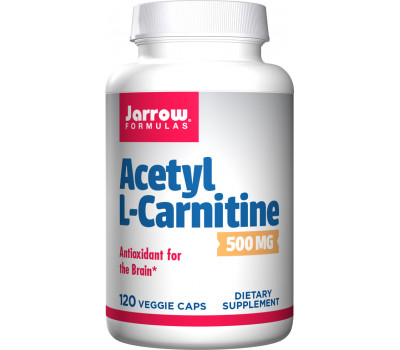 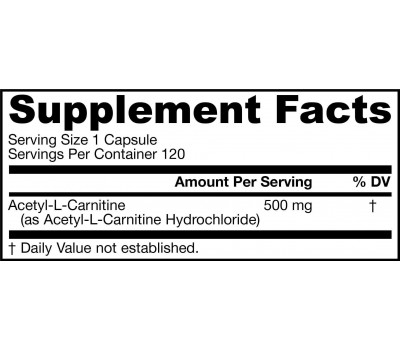 Jarrow Formulas Acetyl-L-Carnitine 500mg 120 capsules is a more bioavailable form of L-Carnitine, an amino acid found in high concentration in human brain, nerve, heart, liver and sperm cells. Acetyl L-Carnitine supports energy production by participating in the metabolism of fatty acids in the mitochondria to yield the universal energy molecule ATP. As an antioxidant, Acetyl-L-Carnitine protects neurons from damage caused by superoxide radicals.

Acetyl L-carnitine (ALC) is an ester derivative of the quaternary amino compound, L-carnitine, which possesses a number of biochemical functions. Primarily, L-carnitine is known for its role in transporting fatty acids into the mitochondria where they are used to create adenosine triphosphate (ATP), the energy currency of the human body. Research has shown that carnitine deficiency lowers ATP levels in various tissues, as might be expected, but more importantly that deficiency increases the susceptibility of the human body to fatigue and decreases the rate of recovery following strenuous, physical activity.

Delivery Efficiency
Although beneficial to the cell, ingesting simple L-carnitine isn’t necessarily the most efficient way to supplement intracellular levels.
Significant investigations have demonstrated the bioavailability of ALC surpasses that of L-carnitine alone. Along these lines, in vitro experiments indicate that although some ALC is hydrolyzed into L-carnitine during the digestive process, a large percentage of acetylated carnitine remains intact. As evidenced in humans, administration of 2 grams of ALC per day for 50 days increased plasma ALC levels by 43%. Further support comes from labeling studies showing radioactively labeled ALC inside intestinal cells with the original acetyl group still attached. Importantly, these same characteristics that allow absorption and delivery efficiency, in general, may play a special role in relation to the brain.

The Brain-Carnitine
Stores of ALC are often found to be deficient in individuals with high blood-sugar levels and related oxidative stress.
In double-blind research, patients with suboptimal nerve function related to blood-sugar imbalances experienced improvement after taking 1500-3000 mg of ALC daily for one year. Similarly, it’s been found that supplementation with 1000 mg of ALC two to three times daily promoted nerve comfort in individuals with suboptimal nerve function.
Several controlled clinical studies have found that supplementation with 2-3 grams ALC daily for 6-12 months supports cognitive function in aging patients with poor short-term memory. This seems to be related to the intrinsic antioxidant activity of ALC, but may also result from effects on acetylcholine levels, which the acetyl-donating ability of ALC is known to positively impact.
Other research has shown that ALC supplementation helped support cognition and attention, as compared to placebo, and positive mood. Such cognitive effects may be mechanistically related to ALC’s ability to modulate the release and receptor binding of another neurotransmitter, dopamine.

In the brain, ALC has been found to support antioxidant status in the brain, helping to promote normalized levels of brain energy metabolites, with an additional role in helping to stabilize cell membranes. Ultimately, these brain-centric effects may derive from ALC’s ability to impact carnitine levels in the brain where simple L-carnitine falls short.

Sperm Motility
Sperm are energy intensive cells needing readily available ATP to power their movement via flagella. Improvements in sperm motility were demonstrated in one placebo-controlled study of ALC.
Participants with poor sperm motility received L-carnitine (3 grams/day), ALC (3 grams/day), a combination of the two (L-carnitine, 2 grams/day; ALC 1 gram/day), or placebo for one month. The ALC and combination groups showed statistically significant results, with those subjects sporting the lowest baseline sperm motility measures benefitting the most.

Ketone Bodies as Fuel
Aside from being a source of L-carnitine and assisting in the shuttling of fatty acids into cells where they can be turned into ATP, ALC can be a source of acetyl groups that facilitate alternate energy production pathways. ALC can help generate ketone bodies that are utilized for energy production when glucose levels are low. There is some evidence that the body may store acetyl groups, by generating ALC from L-carnitine, for this particular reason.

Acetyl-L-Carnitine is an amino acid like compound found in high concentrations in human brain, nerve, liver and sperm cells. Acetyl-L-Carnitine supports energy production by participating in the metabolism of fatty acids in the mitochondria yielding the universal energy molecule ATP. As an antioxidant, Acetyl-L-Carnitine protects neurons from damage caused by superoxide radicals.

recommended use
Take 1 to 2 capsules per day on an empty stomach or as directed by your qualified health care consultant.

storage
keep dry and closed in a cool place, but do NOT refrigerate.
keep out of reach of young children