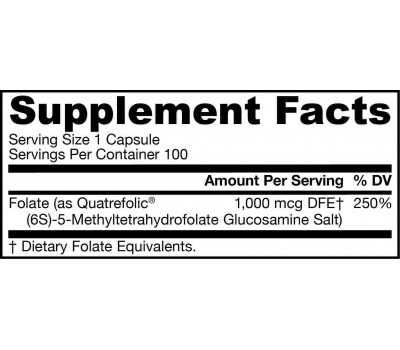 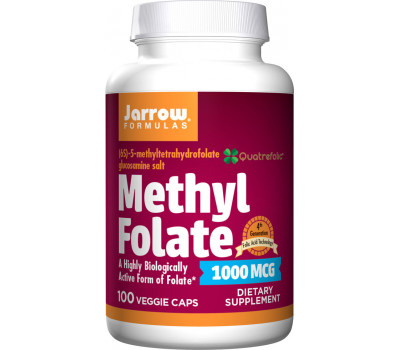 Jarrow Formulas Methyl Folate 1000mcg with 5-MTHF is the most biologically active form of folic acid.
QUATREFOLIC is the 4th generation development in folate delivery. With certain inherited errors in metabolism and under a variety of physiologic stresses, the transformation of folic acid into the active form of folate either does not properly take place or is inadequate. Unlike folic acid, this form of folate can cross the blood-brain barrier.
Methyl Folate is needed to support cardiovascular and neurologic health and proper cell division. Folate supplementation during pregnancy has been shown to reduce the risk of neural tube birth defects.

Health claim: healthful diets with adequate folate may reduce a woman’s risk of having a child with certain brain or spinal cord defects.

At the turn of the 20th century, medical wisdom held that folate (vitamin B9) deficiency and anemia were one and the same. Then, in the 1930’s, it was discovered that anemia could be reversed with brewer’s yeast and that folate was the critical component therein, upon isolation from spinach leaves. This is when it was named “folate” (Latin: folium = leaf). A decade later, the first chemotherapy drug, 4-aminopteroic acid (aminopterin), was developed after understanding the action of folate in the body. Then, in the 1960s, scientists discovered that folate deficiency during pregnancy led to neural tube defects, such as spina bifida and anencephaly, in newborns. Folate supplementation during pregnancy has been shown to reduce the risk of neural tube birth defects.

Folic Acid & Folate: Paternal Twins or Distant Cousins?
Folate is a generic name for a naturally occurring family of compounds containing a pteridine ring linked to p-aminobenzoic acid and containing a polyglutamate tail. The folates found in food consist of a partially bioactive mixture of folate polyglutamates, but these tend to readily degrade during harvesting, storage, and food- processing. Up to three-quarters of initial folate activity may be lost. Synthetic folic acid, which is used for fortification, is much more stable because the pteridine ring is not reduced; it also is devoid of the polyglutamate tail.

But concerns have been raised about the potential side effects associated with too much synthetic folic acid intake. In contrast, it is not generally believed that natural folates present such risk even at high levels of intake.

Folate → Dihydrofolate → Tetrahydrofolate ↔ Methylene- THF → Methylfolate (5-MTHF) Bioactive Form
The difference may stem from the biochemical conversion of folic acid to the bioactive form. In humans, the initial reaction is unusually sluggish. It takes place at < 2% the rate as in rats. And just as surprising, the activity of this enzyme can vary amongst humans by 500%. Natural folates, largely avoid this bottleneck since they are already partially on their way toward the bioactive form.

Folate Metabolism Genetics
For the final conversion step from methylene-THF to methylfolate (5-MTHF), roughly 10% of the population has a severe deficiency of the required enzyme. Another 40% convert only a limited amount. For them, folic acid utility is questionable and deficits observable. Homocysteine, a marker of cardiovascular concern, tends to be elevated as methylfolate is critically involved in recycling homocysteine back to methionine. 5-MTHF is also able to cross the blood-brain barrier, where folate status is linked to neurotransmitter levels and cognitive performance.

Quatrefolic ® : 4th Generation Advantages
Since dietary folate easily deteriorates and folic acid is suscepti - ble to bottlenecks and impasses in the conversion to the bioactive form, there’s certainly room for improvement in supplementing this B vitamin. 5-MTHF itself overcomes one shortcoming by providing the bioactive form. While stabilizing the 5-MTHF as the glucos - amine salt, unique to this product, leads to gains in both stability and bioavailability.

Methyl Folate (5-MTHF) is the most biologically active form of folate. Quatrefolic ® ((6S)-5-methyltetrahydrofolate glucosamine salt) is the 4th generation development in folate delivery. With certain inherited errors in metabolism and under a variety of physiologic stresses, the transformation of folic acid into the active form of folate either does not properly take place or is inadequate. Unlike folic acid, this form of folate can cross the blood-brain barrier. Methyl Folate is needed to support cardiovascular and neurologic health and proper cell division.

Forging Fortification
Recommendations for an additional 400 mcg of folate daily were adopted for women who might become pregnant. But it was soon realized that many had difficulty obtaining enough folate, despite high levels being present in dietary sources like, leafy vegetables, legumes, and egg yolks. Mandating folate fortification in the food supply was proposed as a solution.

In 1996, the U.S. Food and Drug Administration (FDA) instituted the requirement that folic acid be added to enriched breads, cereals, flours, corn meals, pastas, rice, and other grain products. According to the Center for Disease Control and Prevention (CDC), the policy of folic acid fortification has decreased the rate of neural tube defects by 25%.

recommended use
Take 1 capsule per day with food, or as directed by your qualified health care consultant.

warning/contra-indication
NOTE: The elderly should frequently check B12 status; use of folic acid may mask pernicious anemia.
1000mcg: Do not take more than one capsule a day: the safe upper limit of folic acid consumption is 250% (1,000 mcg) of the daily value.
If you have a medical condition, are pregnant, lactating, or trying to conceive, are under the age of 18, or are taking medications (especially antiepileptic and chemotherapy medications), consult your health care practitioner before using this product.