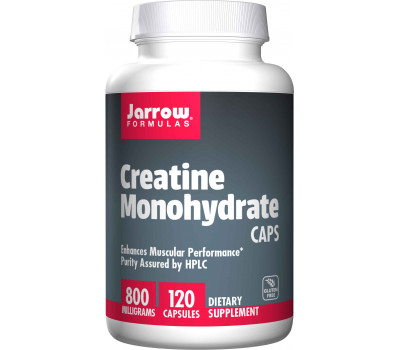 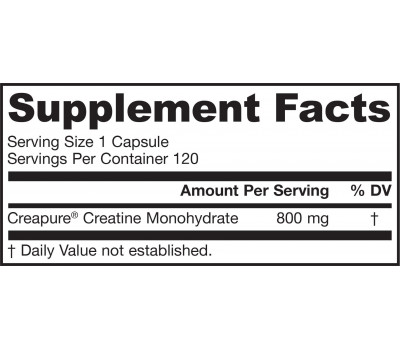 What does Jarrow Formulas Creatine Monohydrate Caps 800 do?
Creatine is synthesized in the liver and stored in the major muscles, including cardiac and skeletal tissues. Once inside the muscle cells, creatine is phosphorylated to form creatine phosphate (CP), which, as a high energy substrate for the universal energy molecule adenosine triphosphate (ATP), assists in the contraction of the myofibrils (muscle fibers). Creatine Phosphate is utilized to maintain higher levels of ATP during exercise. Creatine Phosphate maximizes physical performance and reduces exercise fatigue by absorbing hydrogen ions released by muscles in the form of lactic acid. Intense anaerobic exercise, such as weight lifting and sprinting, depletes ATP and greatly increases the demand for creatine.
Creatine is not just beneficial for athletes, but also for people with cardiovascular diseases. The capsulated form is ideally suited for cardiovascular support, as a smaller dose is already sufficient.

background reading
Creatine is a naturally occurring amino acid, synthesized in the body as well as ingested as part of a natural, meat-consuming diet. Creatine, once it is ingested or generated, is mostly stored in skeletal muscle, and is enzymatically converted into phosphocreatine. Phosphocreatine is broken down into phosphate and creatine, and the energy released from this reaction is used to produce the primary source of energy, ATP. Thus, when you have adequate stored creatine in the muscle, this would not only efficiently provide available ATP, but also increase the re-generation of phosphocreatine afterwards, accelerating muscle endurance, performance, and recovery. Additional clinical studies have also found that this naturally occurring substance can stimulate the building of big and powerful skeletal muscles by significantly increasing lean muscle mass.

Creatine monohydrate
Numerous double-blind controlled clinical studies have been carried out using short-term supplementation with creatine monohydrate (~5g/day), and they have shown significant improvements in athletic performance. For example, speed and power output during sprints were better in the experimental group compared to placebo group (5- 10%). The total work output during repetitive sprints was enhanced by 5-15%, and the work performed during multiple repetition strength tests was similarity elevated by 5-15%. Furthermore, one-repetition maximum strength and vertical jump performance were improved by 5-10%. All observed athletic performance enhancement has been correlated with the amount of creatine stored in the skeletal muscle following creatine supplementation, particularly in the type II muscle fibers.

In long-term studies in which subjects were treated with up to 25g/ day of creatine for a week, followed by up to three months of smaller dosage supplementation (2-25g/day), dramatic improvements were observed in endurance and performance during single-effort sprint, repeated sprints, and repeated strength, compared to placebo groups.

recommended use
Take 1 to 6 capsules with water or fruit juice (Glucose, as found in certain fruit juices, enhances uptake and utilization of creatine monohydrate) – a minimum of 2.5 ounces of fluid for each capsule consumed; for higher intakes, consult your qualified health care consultant.

contra-indications
If you have a medical condition (especially kidney or liver disorders), are pregnant, lactating, or trying to conceive, are under the age of 18, or are taking medications, consult your health care practitioner before using this product.