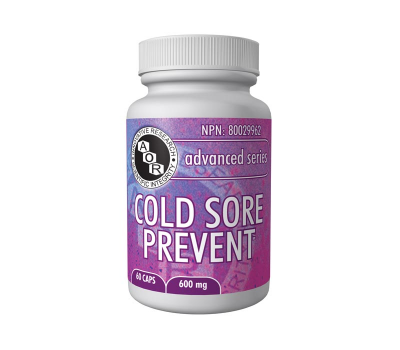 Discontinued, we recommend to replace Cold Sore Prevent with a combination of lactoferrin and lysine

Cold Sore Prevent
Lysine is an essential amino acid which means it must be obtained through diet. Lactoferrin is a whey protein present in mammalian breast milk and produced in smaller amounts in the human adult body. Both are important for good immunity, and although their deficiencies are rare, supplementation can be therapeutically useful.

Herpes Simplex Virus and cold sores
Cold sores are not only an unsightly and embarrassing manifestation of a viral outbreak; they can be itchy, painful, and just plain annoying. The herpes simplex virus exists as two principal strains. HSV-1 tends to cause mainly cold sores, and HSV-2 tends to be responsible for genital herpes, although there is some crossover. Both lysine and lactoferrin have been found to decrease the recurrence of cold sore and herpes outbreaks by inhibiting viral replication of both strains. They also may reduce the severity and duration of outbreaks after extended supplementation.

Many other benefits
Lysine and lactoferrin may be natural treatment alternatives or adjunct treatments to conventional medications and vaccinations for herpes simplex virus outbreaks. Both natural compounds are also useful as antibacterial, antiviral and immune enhancers. In addition, this combination also has skin and bone health benefits, since lysine helps form collagen and regulate calcium, and lactoferrin can help treat acne and stimulate bone growth.

benefits
• decreases the frequency of cold sores
• effective against both cold sores and herpes
• may decrease the severity and duration of outbreaks
• effective immunity enhancer, antibacterial and antiviral

background reading
L-Lysine is one of the nine essential amino acids that must be obtained by dietary means to avoid deficiency. Like many amino acids, L-Lysine has multiple functions in the body because it is incorporated into many proteins that are used for a variety of purposes. Despite the rarity of deficiency, supplementation has still proven useful to treat herpes and cold sores, augment body-building and growth, support bone health, and maintain carnitine levels, an important factor in energy and aging.

Lactoferrin
Lactoferrin is a whey protein derived from milk. It is present in human breast milk, and is one of the important molecules that help newborns develop their immunity. Lactoferrin is a multitasking protein with several biological roles. Lactoferrin has been found to have antiviral, antineoplastic, antibacterial, antifungal, immunomodulating and anti-inflammatory activity. Lactoferrin has been clinically studied in neonatal units to prevent bacterial and viral infections during hospitalization. It is such a potent immunomodulator that it has been well-studied in cancer patients to help battle cancer and enhance patients’ immunity. Bovine lactoferrin is absorbable by humans and has the same mechanism of action.

Cold Sores and Herpes
The herpes simplex virus is probably one of the most common viruses that humans carry for life. Up to 60% of children less than 10 years of age, and up to 90% in adults by the age of 50, are infected with HSV-1. The herpes simplex virus is easily transferred from one person to another via kissing, sharing food or utensils, or simply from a lack of hand washing and then touching public objects. About 16% of adults are infected with HSV-2, generally through sexual contact. The virus can also spread to other areas of the body such as the eyes or hands by touching an open sore and subsequently rubbing the eyes or failing to wash the hands.
A herpes simplex viral infection is generally for life. The infection usually goes unnoticed until a sore is produced. The virus remains inactive while stored away in nerve cells near the initial site of infection. Outbreaks are the result of a cycle of viral replication when the virus migrates from the nerve cell toward the surface of the skin and reproduces. This outbreak can be brought on by stress, hormonal fluctuation, sun exposure, illness or injury to the skin.

Natural Treatment
One common use for L-Lysine is the treatment of herpes and cold sores. It is thought that L-Lysine's usefulness in the latter is based on its ability to impede the utilization of L-arginine by some lipid-coated viruses. These viruses are therefore prevented from using L-arginine during key phases in their life cycle, thus weakening them, inhibiting viral replication and allowing the body to heal more quickly and reduce the possibility of recurrence. L-Lysine is mainly thought to reduce the recurrence of cold sore or herpes outbreaks, although its effect on severity and duration of symptoms is debatable. One 6-month study found that recurrence, severity and duration were all significantly reduced with a minimal dose of 1,248mg of lysine per day. However, in shorter studies, severity and duration were not always significantly decreased. L-lysine is found to be especially effective when combined with a prescription antiviral medication such as acyclovir (Zovirax™) or valcyclovir (Valtrex™).
In vitro, it appears that both human and bovine lactoferrin and lactoferricin, one of lactoferrin’s breakdown products, inhibit HSV-1 and HSV-2 viral access to cells during replication. Lactoferrin seems to be effective in blocking viral replication when present at the cell surface while lactoferricin seems to be effective when inside the cell. Lactoferrin inhibits the infection of human embryonic lung cells by both herpes and cytomegaloviruses and prevents the attachment of bacteria to the intestinal wall thus preventing infection. One study in mice found that only lactoferricin inhibited the replication of the HSV-2 virus, delaying the onset and reducing the viral load after infection.

recommended use
Take 2 capsules a day, or as recommened by a qualified health practioner.

storage
keep out of reach of young children

vegetarians/vegans
not suitable for vegans