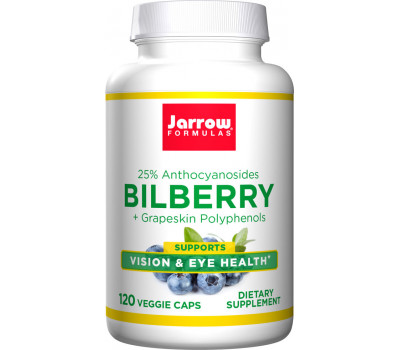 Jarrow Formulas Bilberry with a Swedish bilberry extract supports the blood flow to the eye, supplying oxygen with fresh blood to the eyes should have a benefical impact on the eyes.

who can benefit from Bilberry?
Bilberry+Grapeskin polyphenols is perfect for people seeking support for their eyes and night vision.

background reading
The bilberry is a close relative of the American blueberry. It grows in Northern Europe, Canada, and parts of the Northern United States, where the berries are known as huckleberries. There are over 100 species with similar names and fruit. The English call bilberries whortleberries. The Scots know them as blaeberries. Now the goodness of these famous berries is available in Jarrow Formulas Bilberry + Grapeskin Polyphenols.

The bilberry has many historical or traditional uses based upon both the dried berries and the leaves. Used as a medicinal herb since the 16th century, modern interest in the bilberry is partly based on the fruit’s use by British pilots during the Second World War. These pilots noticed that their night vision improved when they ate bilberry jam prior to night bombing raids.
In the intervening years, scientists discovered that anthocyanosides, the bioflavonoid complex in bilberries, are potent antioxidants. Many of the traditionally suggested uses of bilberry no doubt reflect the antioxidant and vitamin C-sparing properties of the berry.
However, the astringent qualities of both the dried bilberry fruit and bilberry tea may also provide some benefits, and help to explain the use of these in folk medicine to soothe the gastrointestinal tract.
In Europe, bilberry extracts are accepted conventionally as a normal part of nutritional health care for the eyes. To complement the bilberry extract, Jarrow Formulas has added another polyphenol antioxidant, 200 mg of red grapeskin extract (from Vitis vinifera grapes). Grapeskin extract provides flavonoids that are complementary in structure and nutritional functions to bilberry polyphenols.

Food for the eyes
Much of the modern research on bilberry extract has focused upon the benefits to the eyes. Bilberry anthocyanosides provide three primary benefits to these organs.
First, these highly colored plant pigments nourish the retina. Night vision depends on the retina’s ability to constantly regenerate visual purple (rhodopsin), and anthocyanosides serve as “building blocks” for this important substance. Tests have confirmed these benefits. When subjects with normal vision supplemented with bilberry extract, it was found that the acuity of their nighttime vision improved, as did the speed at which they adjusted to darkness and the rate at which they recovered from blinding glare. After reviewing the literature, some authors have suggested that bilberry extract helps with distance vision as well.

The benefits of bilberry anthocyanosides extend beyond the regeneration of visual purple. The eye depends upon high relative blood flow and is exposed to large amounts of oxygen. Such factors mean that the eye is extremely vulnerable to problems arising from capillary fragility and that prevention of damage by free radicals plays a major role in maintaining eye health. Bilberry helps to maintain integrity of the collagen integral to the support structure of the capillaries.

Similarly, age-related vision problems appear to be influenced by the rate of generation of free radicals. In laboratory trials, changing the diets from commercial laboratory chow to “well-defined” diets rich in flavonoids has been shown to be beneficial. Interesting results have been found with human trials in which bilberry extract was supplemented, either alone or in combination with vitamin E.

Circulatory protection
Next to the ocular system, the physiologic system which benefits most from bilberry extract is the circulatory system. Bilberry anthocyanosides cross-link to collagen fibers, and thereby reinforce the naturally cross-linked matrix of these fibers found in the walls of blood vessels as well as in cartilage and tendon.

Bilberry anthocyanosides posses strong “vitamin P” characteristics. The “P” stands for the permeability of capillaries and how flavonoids strengthen microvessels against excessive permeability.
When taken as a supplement, these anthocyanosides have been shown to improve microcapillary circulation and be helpful to veins. Hence, one of the same mechanisms which safeguards the health of the capillaries which feed the eyes also safeguards the health of the circulatory system more generally. These plant compounds stabilize the membranes of the connective tissues which surround the blood vessels.
Some research further suggests that anthocyanosides may increase the rate of biosynthesis of connective tissue ground substance.