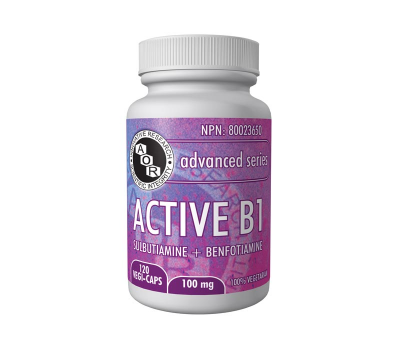 Discontinued, we refer you to either benfotiamine or sulbutiamine

AOR Active B1 contains Sulbutiamine, a fat soluble thiamin (vitamin B1) derivative and Benfotiamine, another form of thiamin with a superior ability to penetrate cell membranes and increase bioavailability over conventional thiamin supplements. Vitamin B1 is a factor in the maintenance of good health, and helps the body metabolize carbohydrates, fats and proteins

Normally, thiamine absorption into the body is limited by the need to be transported into a cell rather than being able to enter freely. Sulbutiamine and Benfotiamine are highly absorbable forms of thiamine that can diffuse easily into cells and are therefore able to perforate all areas of the body to ensure adequate functioning of the brain, muscle and nerve tissues. Sulbutiamine is one of few thiamine derivatives that is able to cross the blood brain barrier to deliver adequate amounts of thiamine to the brain. The brain is one of the largest users of thiamine, and a cognitive decline can result from deficiency. Benfotiamine has very interesting benefits. Through various mechanisms, benfotiamine has been shown to inhibit the formation of advanced glycation endproducts (AGEs), which are proteins that have been deformed by the attachment of sugars, making the proteins dysfunctional and damaging DNA. This process is referred to as glycation, which is partly what causes cells to age. Benfotiamine can therefore slow the aging of a cell. This is highly beneficial in neuropathies related to diabetes mellitus. AGEs have also been implicated in Alzheimer's disease.

Thiamine can help with cognitive function, muscular function, diabetic complications and cellular aging. Active B1 is formulated to deliver thiamine to both the peripheral tissues as well as to the brain to prevent thiamine deficiencies and its associated complications.

background reading
The importance of vitamin B1
Thiamine is Vitamin B1, which is primarily obtained from the outer shell and germ of grains such as wheat, rice and barley, along with other B vitamins. It is also present in some vegetables and meats. However, yeast is the richest nutritional source of thiamine. In the body, thiamine helps with energy production, cognitive function, muscle function, and cellular aging.

Early research stemmed from Japan where it was noted that navy soldiers did not develop beriberi (a neuropathy condition that can quickly lead to death) when fed whole grain rice over polished white rice. Thiamine is the form in which Vitamin B1 is transported to the tissues, but its biologically active forms include various forms of phosphorylated thiamine derivatives such as thiamine pyrophosphate / diphosphate.
Foods such as coffee, tea and wine and preserved foods containing sulfites can actually break down thiamine or inhibit its conversion, leading to a thiamine deficiency. Folic acid deficiency can also inhibit its absorption, and acidic conditions can accelerate these processes. Therefore, thiamine deficiency can be caused by an overconsumption of such foods or by conditions that cause impaired nutrition, such as some gastrointestinal disorders.

Thiamine Deficiency Causes AGEing
Thiamine deficiency is the cause of conditions such as beriberi and Wernicke’s encephalopathy. The first is characterized by neuropathy, muscle weakness and eventually paralysis, while the latter presents itself in cognitive and mental deficits. Research has shown that many people with diabetes have thiamine deficiencies, either due to a lack of thiamine consumption or due to an excessive intake of foods that cause thiamine breakdown or excretion. Thiamine is essential for proper carbohydrate metabolism since it is a cofactor for the enzymes that help to process these sugars. When thiamine is deficient, sugars are metabolized through alternate pathways that do not require thiamine. Unfortunately, these alternate pathways produce harmful metabolites that damage the blood vessel lining and the myelin sheaths and axons of nerves, which can lead to heart disease and neuropathies. One of these metabolites is appropriately called an AGE, or an advanced glycation end-product. Slowly, imperceptibly, AGE reactions create chemical handcuffs, which gum up your proteins, deactivate your enzymes, trigger unhealthy biochemical signaling in your cells, and damage your DNA, producing cellular “AGEing.”

Benfotiamine and Sulbutiamine Help Prevent AGEing
Thiamine uptake is generally limited by the rate of active transporters that move nutrients across cellular membranes. The brain requires large amounts of thiamine in order to function properly, however very little thiamine actually reaches the brain because it cannot cross the blood brain barrier. Luckily, sulbutiamine and benfotiamine (which is dephosphorylated to form S-benzoylthiamine, which is the absorbable form of benfotiamine) are much better absorbed than thiamine as they are able to passively diffuse across membranes rather than depending on a transport mechanism. These molecules are then converted into thiamine phosphates, such as thiamine pyrophosphate, which is the active co-enzyme form of vitamin B1.

Normally, AGE products and AGEd proteins are cleared out by the kidneys at an adequate rate. However, when there is a thiamine deficiency, AGEs build up in the tissues, wreaking havoc on nearby tissues. Cell AGE receptors, RAGEs, activate inflammatory cascades which cause oxidative stress, thereby damaging their surrounding blood vessels and neurons. Thiamine pyrophosphate prevents the formation of AGEs via two mechanisms. First, it opens up an important biochemical "safety valve" in the normal metabolism of blood sugar through an enzyme known as transketolase. Activating transketolase allows the body to shunt excess triosephosphates into a safe alternative metabolic pathway, preventing the logjam that leads to the buildup of triosephosphates and thus the formation of AGEs. Secondly, adequate thiamine pyrophosphate levels can also prevent the conversion of amadori products (rearranged glycated proteins) into AGEs. When there is less AGE formation, the body can clear out AGEs more effectively.

Clinical studies
The key is to get adequate levels of thiamine into the cells via the highly bioavailable forms of sulbutiamine and benfotiamine. The facts are that muscles, nerves and blood vessels function better with their help. One study examining the effects of sulbutiamine supplementation on diabetic neuropathy found that 400mg/day for 6 weeks resulted in an improvement in peripheral nerve function.

Two other studies found that 200 mg/day of sulbutiamine improved asthenic symptoms such as fatigue related to microbial infections.
Sulbutiamine has also been suggested to enhance working and episodic memory in an animal study, demonstrating its ability to cross the blood-brain barrier. Sulbutiamine is one of few thiamine derivatives that is able to cross the blood-brain barrier and actually increase thiamine phosphate levels in the brain due to its lipophilic structure.
Thiamin absorption from benfotiamine has been shown to be about five times greater than from conventional thiamin supplements.
It is well established that using varied doses of benfotiamine for painful diabetic neuropathy have shown that symptoms of pain can be improved with benfotiamine supplementation. Pyridoxal-5’-phosphate (the biologically active form of vitamin B6) has also been found to be an excellent AGE inhibitor. One study combined P-5-P with benfotiamine and found significant improvements in pain levels in 86% of patients, sensory nerve conduction and motor nerve conduction in 45% of patients, and even HbA1c (indicator of blood sugar) levels in 63% of patients.
In conclusion, it is essential to consume adequate vitamin B1 levels in order to maintain healthy cells and keep glycation at bay.
Consuming sulbutiamine to help with brain vitamin B1 levels and benfotiamine to help with peripheral B1 levels is much more beneficial than consuming regular thiamin. Together, they will enhance sugar metabolism and prevent neurotoxicity from glycated proteins, thereby improving the function of the muscles, nerves and blood vessels in order to prevent or improve the complications that result from the complications of vitamin B1 deficiency and sugar overload.

contra-indication
do not use during pregnancy or lactation
consult a health care practitioner for use beyond 6 weeks.