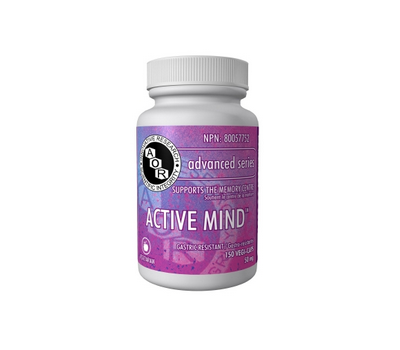 AOR Active Mind represents a breakthrough in one of the key consequences of getting older - memory loss. Active Mind is a science-based natural health product that has been scientifically proven to protect memory function based on the naturally occurring ingredient, homotaurine, found in seaweed.

Is homotaurine the same thing as taurine?
No. Homotaurine and taurine are two different compounds that belong to the same chemical family but have different origins and effects. Taurine is a major constituent of digestive fluids produced by the liver (bile). Taurine can be found in small amounts in the tissues of many animals including humans. Homotaurine does not convert into taurine after digestion and vice versa. Homotaurine has shown a protective effect on brain cells, while taurine has no protective effect.

Why does the loss of brain cells in the hippocampal region occur? Scientific research indicates that the buildup of certain toxic proteins  called beta-amyloid (or A-beta) is detrimental to the brain. When these proteins reach excessive levels, they cause neurons (brain cells) within the brain to malfunction and die. When neurons are damaged or die, signaling problems occur in the brain that ultimately affect memory and learning abilities.

Research has shown that Active Mind protects brain cells by two mechanisms: it reduces the accumulation of toxic Aβ proteins, which can deposit as plaques in the brain. Active Mind also protects brain cells from the toxic effects of the Aβ proteins and thus reduces brain cell toxicity, damage and death, in part through activation of brain cell receptors, called GABAa receptors, in an area of the brain associated with learning and memory (the hippocampus).

Active Mind is a patented product based on the naturally occurring ingredient homotaurine, which binds to A-beta proteins and reduces the deposition and toxic effects of these proteins in the brain.

In a groundbreaking study performed in Canada and the United States using brain scans (magnetic resonance imaging (MRI)), Active Mind was shown to significantly reduce the loss of brain volume in the hippocampus. In fact, Active Mind was proven to preserve 68% more brain volume versus placebo (like a sugar pill).

Active Mind has been shown to:

- protect the brain structure associated with memory and learning
The hippocampus is a brain region associated with learning and memory. Active Mind can help reduce the loss of volume of this very important region through the aging process.

- preserve memory
You know how you can be introduced to someone and forget their name two minutes later? Active Mind can support you in maintaining your ability to remember things like people’s names.

- sustain brain cell health
As you age, it is normal to lose brain cells. Active Mind can help protect your brain cells during the normal course of aging.

Support planning and execution skills
You have just arrived at your vacation destination and you suddenly realize that you forgot to cancel your newspaper subscription. Active Mind can help you maintain your ability to go from the initial planning to remember everything you need to make it a trip you will never forget.

What is the recommended dosage for Active Mind ?
Each capsule of Active Mind contains 50 mg of homotaurine. Active Mind capsules should be taken daily and should be swallowed whole.
The recommended adult dose (18 years of age and older) is 1 to 2 capsules twice a day (in the morning and evening).
It is recommended to take Active Mind with meals. If you miss a dose, do not worry; simply start again the next day at your regular time. Do not double the dose to make up for the missed dose.

What result should I expect to see, or experience after taking Active Mind ?
Taking Active Mind is like taking a vitamin. Essentially healthy individuals in adulthood, who are concerned about possible memory loss, will be protecting their memory. Consider it as an insurance policy for the brain. Much like you buy house, car and life insurance based on what may happen, you will equally take Active Mind based on what may happen.

Is ActiveMind safe?
After hundreds of millions of dollars invested and 15 years of rigorous scientific research, including clinical testing with over 2,000 individuals1 in 68 European, 50 U.S. and 17 Canadian medical centres, Active Mind is now available for consumers. The product has been shown to be safe and generally well tolerated at the recommended daily dose. Some people may experience symptoms such as nausea, weight loss, dizziness or fainting. The recommended dose should not be exceeded, since people may experience more of these symptoms. It should be noted that from what we have seen in the scientific data to date, certain symptoms such as nausea, are generally transient and normally subside by themselves with consistent use. If they persist, contact your health care practitioner.

warning/contra-indication
Some people may experience nausea, weight loss, dizziness or fainting. Do not exceed recommended daily dose as you may experience more of these symptoms.
If you experience any weight loss, drowsiness, dizziness, fainting, persistent nausea, vomiting, or diarrhea, consult a health-care practitioner.
Consumption of homotaurine with alcohol, other medications and/or natural health products with sedative properties is not recommended.
Exercise caution if operating heavy machinery, driving a motor vehicle or involved in activities requiring mental alertness.
Discontinue use if you experience any confusion or any unexpected memory loss.
Do not use if you are diagnosed with stomach ulcers or low blood pressure or if you are pregnant, planning on becoming pregnant, or breast-feeding.